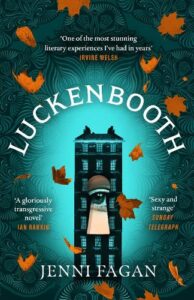 Only enough August paperbacks to fill one post, I’m afraid, half of which I’ve read including one reissue from quite some time ago. I’ll start with Jenni Fagan’s wonderful slice of feminist gothic, Luckenbooth, which spins the stories of the inhabitants of a many-floored Edinburgh tenement over nine decades, beginning with the arrival of the devil’s daughter in 1910, there to service the unpleasant demands of a prominent politician. Impossible to adequately describe this extraordinarily inventive novel which is served up with a healthy dollop of dark dry humour. You’ll just have to read it yourself. So good, I included it on my Booker wish list.

Men behaving badly feature heavily in Luckenbooth, a theme explored in Kate Reed Petty’s debut, True Story, although not in the way you might at first expect. It tells the tale of Alice, left with no memory of what happened to her the night she passed out in the back of a car driven by two boys taking her home from a party. Rumour and uncertainty about the events of that night have dogged Alice all her life and now her best friend from that time is determined to expose the truth to the world but Hayley’s version may not be the same as Alice’s. It’s a cleverly constructed novel, a smart piece of fiction whose ambition pays dividends.

coverage. Her new one, Perfect Tunes, begins in 2000 when a brilliant young songwriter’s career is derailed by a brief affair, shortly after arriving in New York. Fast forward fifteen years and her daughter’s curiosity about her father coupled with the arrival of her best friend, now a successful musician, unsettles Laura’s stable Brooklyn life. ‘Funny, wise and tender-hearted, Perfect Tunes explores the fault lines in our most important relationships, and asks whether dreams deferred can ever be reclaimed’ according to the publishers which sounds very appealing. Curtis Sittenfeld, Chad Harbach and Stephanie Danler (author of the excellent Sweebitter) are all Gould fans if that helps persuade you.

I read and enjoyed Min Jin Lee’s Free Food for Millionaires when it was first published here in the UK well over a decade ago. It’s about Casey Han, the daughter of working-class Korean immigrants, whose years at Princeton have left her with a decent education and a set of expensive habits but no job. She and her parents both live in New York but they inhabit very different worlds. ‘As Casey navigates an uneven course of small triumphs and spectacular failures, a clash of values, ideals and ambitions plays out against the colourful backdrop of New York society, its many layers, shades and divides…’ say the publishers. I remember Casey as particularly endearing. 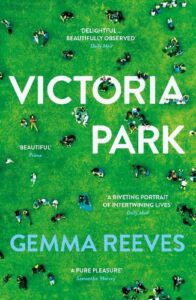 As are many of the characters in Gemma Reeves’ Victoria Park, an evocative portrait of a London neighbourhood which follows the intersecting lives of its inhabitants over a year that’s mundane for some, dramatic for others. Like any neighbourhood, Victoria Park is not without its troubles – a young man, terribly injured by an acid attack, lies in a coma – nor has it escaped the relentless rise of property prices. As the year wears on, an affair will be ended, a body will be found, a wedding will be celebrated, a baby conceived and an ageing resident will continue to lose her grip on the present. Beautifully executed, Reeves’ absorbing enjoyable novel is imbued with gentle humour, compassion and affection.

Entirely different, Charles Yu’s award-winning Interior Chinatown inhabits the world of TV with its story of Willis Wu, a bit-player in a procedural cop show that never seems to end. Willis longs to take on a starring role but even in his own head he’s a player of walk-on parts. ‘Playful but heartfelt, a send-up of Hollywood tropes and Asian stereotypes, Interior Chinatown is Charles Yu’s most moving, daring, and masterly novel yet’. I’ve not read Yu’s How to Life Safely in a Science Fictional Universe but have heard good things about it and this new one sounds very tempting.

Baghdad in 2003; a pianist who fled Saddam Hussein’s regime a decade before; a son faced with his father’s dementia in 2000 and in the present day, the son of the war veteran scarred by his father’s tyranny. ‘Crossing the frontiers of war, protest and cultural reconciliation, Act of Grace is a meditation on inheritance: the damage that one generation bestows upon the next, and the potential for transformation’ says the blurb of a novel which sounds a tough but rewarding read.

Two short story collections round off August’s paperbacks goodies, the first of which takes us back to the neighbourhood theme  I loved Hiromi Kawakami’s The Nakano Thrift Shop and Strange Weather in Tokyo, both straightforward novels, so was a little surprised by the wackiness of her short story collection, Record of A Night too Brief enjoying it, nevertheless. People From My Neighbourhood sounds different again, comprising a set of the briefest of stories all about a particular neighbourhood where everything is a little off kilter: ‘A small child lives under a sheet near his neighbour’s house for thirty years; an apartment block leaves its visitors with strange afflictions, from fast-growing beards to an ability to channel the voices of the dead; an old man has two shadows, one docile, the other rebellious; two girls named Yoko are locked in a bitter rivalry to the death’ says the blurb giving a flavour of what to expect. Very keen to read this one. 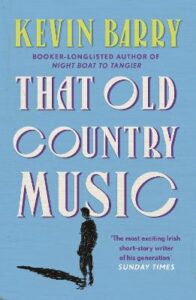 Acclaimed short story writer Kevin Barry’s That Old Country Music is a gem of a collection which explores themes of love, desire, and death through a diverse set of characters, often firmly rooted in their communities lending it a strong sense of place. His language is precise, sometimes earthy, sometimes lyrical, but always carefully chosen. Many of his stories are melancholic but they’re often infused with a wry humour and the writing is sublime. No idea why it’s taken me so long to get around to reading Barry’s work.

That’s it for August. As ever a click on a title will take you to a more detailed synopsis should you wish to know more, and if you’d like to catch up with new titles they’re here.