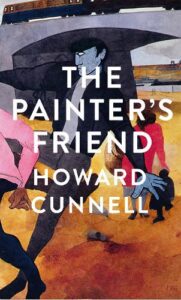 As regular readers will know, I can’t resist a novel with an art theme which is why I put up my hand for a copy of Howard Cunnell’s The Painter’s Friend. That and the memory of the praise heaped upon his memoir, Fathers and Sons, which explored his own relationship with his father as his daughter transitioned into his son. The quote at the top of this review comes from an inscription by Walter Crane on a floor panel, uncovered by an artist whose installation Cunnell visited, which sowed the seed of the themes he explores in this gripping, beautifully written novel.

Food or rent, rent of food. These were our choices

Terry Godden is an artist who’s known more hard times than many and whose work exchanges hands for exorbitant prices, bought by collectors as interested in gaming the market for money as the art itself, sometimes more so. Terry’s painting of two ex-miners preparing to settle a score long after one of them had broken the ruinous strike back in the ’80s caught the eye of a dealer who promised Terry a show which never materialised leaving him with a dangerous anger. Homeless again, Terry rents a boat moored on one of London’s islands. His neighbour, a well turned-out elderly man, takes no notice of him which suits Terry fine. As spring wears on, despite his intentions, Terry finds himself drawn into the lives of the islanders, each with a story, from the woman fleeing her abusive partner who calls herself Stella to Gene, relentlessly questioned by the police about the disappearance of his beloved son. When the islanders receive notice of a rent rise, a ploy by its rich property developer owner to get them out, Terry devises a clever solution, turning the island into an outside gallery so that the attention of the world will turn their way.

Kaplan’s house across the river seemed to exist in starbursts, blazing from every window in the house and from the marquee that was set up on the big lawn.

Cunnell’s passion for the themes of art, entitlement and division that underpin his novel are evident from the author’s note that completes his book, explaining the inspiration behind it. Told through Terry’s voice, it’s a gripping piece of storytelling with a page-turning pace written in a painterly yet spare, clipped style, atmospheric in its descriptions of the island and the islanders. The stark contrast between the privileged rich and those who a rent rise of £250 per quarter will render homeless is made vividly apparent. There’s a rich irony towards the end of the novel when Terry is shown his own painting of the miners, unemployed for decades since the strike, now adorning the walls of this wealthy man, the son of a Thatcherite. I found it both engrossing and deeply moving. The ending is shocking, not easy to read, but it rang all too true.

24 thoughts on “The Painter’s Friend by Howard Cunnell: ‘The Source of Art is the Life of a People’”