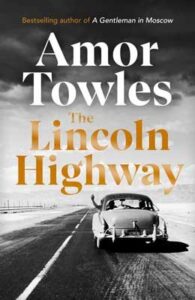 I loved Amor Towles Rules of Civility but, for some reason that I can’t now remember, could not get on with A Gentleman in Moscow at all. That didn’t stop me from putting my hand up for a proof of The Lincoln Highway whose stylish jacket seemed to offer the prospect of a road novel, long enough to sink into. Towles’ book turned out to be a 1950s American odyssey which takes three young men and an eight-year-old boy on a series of adventures beginning in Nebraska. It’s a chunkster, but never a baggy one.

Most people need a ladder and a telescope to make sense of two plus two. That’s why it’s usually more trouble than it’s worth to explain yourself. But not Emmett

Seventeen-year-old Emmett has been released early from Salina, the youth detention centre where he was sentenced to spend eighteen months for involuntary manslaughter. His father has recently died deeply in debt but Emmett has a plan. Having found himself a job with the local carpenter, he’d saved enough money to buy a Studebaker and gained sufficient skills to set himself up fixing-up houses before his detention, his eyes set on Texas. Eight-year-old Billy has other ideas, having found the postcards their mother sent after she left them when he was a baby, hidden in a drawer by their father. Billy is convinced she’s in San Francisco and is sure they’ll find her at the July 4th celebrations, travelling there along the Lincoln Highway which crosses the country from east to west. All he needs to do is persuade Emmett. Then Duchess and Woolly turn up, friends of Emmett and newly escaped from Salina. Duchess also has a plan which involves enabling Woolly to get his hands on the money held in trust for him at his wealthy family’s camp in New York State, the opposite direction to San Francisco. So begins a series of adventures worthy of Professor Abernathe’s Compendium of Heroes, Adventurers, and Other Intrepid Travelers, Billy’s treasured guide for life, including a meeting with the great man himself.

Ah, I thought, seeing the corner of the book poking out from the folds of his sheets. I should have known. The poor old chap, he suffers from the most dangerous addiction of all

Towles’ novel is a gripping, hugely entertaining take on the Odyssey, full of suspense, with a cast of engaging characters of which Billy is the undoubted star. Child characters are a tough act to pull off but Billy is a delight: resourceful, intelligent, determined and brave. You’d do well to have him on your side in a tight spot. Towles switches back and forth between his four main protagonists, telling their backstories as he does so while spinning a host of other gloriously vivid tales, with the occasional interpolation from minor characters – I particularly enjoyed Sally’s voice, furious at being taken for granted by her father for years and determined that Billy has a bath once she catches up with him. Towles’ story is full of cliffhangers and includes some enjoyable hat tips to the original Odyssey, all served up with a hefty dose of humour and a touch of tragedy. Should you be looking for a winter read to tuck yourself up with and escape the world, I’d recommend it.

32 thoughts on “The Lincoln Highway by Amor Towles: A 1950s American odyssey”