This is going to be a short post, not that there aren’t lots of paperbacks published in October but few of them take my fancy, I’m afraid, which is probably best for my credit card. I’ve already read and reviewed three at length here so I’ll start with those. 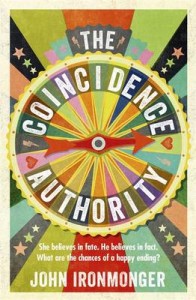 The first is John Ironmonger’s The Coincidence Authority which has a much more eye-catching jacket than the hardback. Humans look for patterns in everything: we seek the reassurance of predictability in a world which is chaotic and random. It helps to keep us sane rather than face a future in which a chance accident may rob us of all that is dear to us. At least that’s what I think. You, of course, may feel that everything happens for a reason, that there is a plan. That’s the debate at the heart of this novel which I enjoyed very much.

My second choice is Equilateral by Ken Kalfus, a tale of madness, folly and Martians. Set at the end of the nineteenth century, Equilateral opens in the Egyptian desert where nine hundred thousand Arab fellahin labour to create a vast equilateral triangle which will be seen from Mars, so Sanford Thayer, celebrated astronomer and instigator of the project, has calculated. Inspired by Giovanni Schiaparelli’s maps based on his observations of the Red Planet which depict canali on its surface together with his own theories derived from evolution, Thayer has come to the conclusion that Martians are a superior race, busy trying to conserve their dwindling water supplies, with whom earthlings should try to communicate. Sounds bonkers, I know, but Kalfus has a great deal of fun with the idea taking a few well-aimed kicks at colonial arrogance along the way.

My third already-reviewed choice is an entirely different kettle of fish. Hubert Mingarelli’s spare novella, A Meal in Winter, in which three hungry German soldiers striding through a frigid Polish forest flush out a young Jewish man, a prize which will ensure that they will be sent out to hunt again tomorrow rather than man the firing squad. One soldier reveals that he’s stolen enough food to make soup and spotting an abandoned cottage they set about lighting a fire, interrupted by the arrival of a hunter and his dog. What ensues frays the bonds between the three soldiers, opening divisions between them and forcing them to face 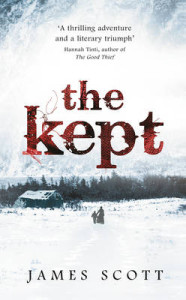 the moral dilemma of what to do with their captive. A beautiful piece of writing.

My last choice for this month is James Scott’s The Kept, set in nineteenth century upstate New York where Elspeth Howell has returned to find that her family has been murdered – all apart from her twelve-year-old son. Together they set out to find the culprits. It sounds a bit like Gil Adamson’s The Outlander which I very much enjoyed and Ali’s review at Heavenali  has piqued my interest further.