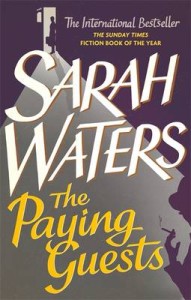 I’ve reviewed all but two of the June paperbacks that have caught my eye so forgive me if I cram the lot into a single post and let the reviews speak for themselves. I’ll start with one that I haven’t got around to reading although I’ve had a copy for some time: Sarah Waters’ Baileys shortlisted The Paying Guests. I’m a big fan of Waters’ earlier novels but not so much her last two. In this one, she’s shifted her gaze from the 1940s to the ‘20s, setting her book in Camberwell where Frances and her widowed mother have fallen on hard times and are taking in lodgers. The arrival of Lilian and Leonard Barber, neither as genteel as the Wrays, shakes up the household in what Waters has called a love story ‘in which the love is forbidden, in all sorts of ways; it’s a story in which the love is dangerous’.

My second unreviewed title is Peter Buwalda’s much lauded Bonita Avenue, described as ‘a darkly hilarious tale’ in which a vulnerable young man finds himself embraced by his girlfriend’s family headed by the multi-talented Professor Sigerius. Things go horribly wrong, apparently, with all sorts of shenanigans from an explosion in a firework factory to a forgotten murderer turning up. Translated from the Dutch, it sounds as if it’s from the same school as Herman Koch’s The Dinner and Esther Gerritsen’s Craving.

There are two other translated titles on this month’s list, both by German authors, each very different from the other. Hard to choose which is my favourite but if pushed I’d plump for Jenny Erpenbeck’s The End of Days, although it’s a bit of a Marmite novel: you’ll either marvel at the way Erpenbeck adroitly handles the constant shifts in narrative throughout her complex novel or you’ll despair of ever keeping track as she views the Eastern European twentieth century through a woman whose fate is constantly re-imagined rather in the way that Kate Atkinson does with Ursula Todd in Life After Life. I thought it was excellent, but I’m a Marmite fan.

Written in a mixture of three different first-person narratives with third-person sections crisscrossing time and assorted other devices you’d think that Daniel Kehlmann’s F might become a little fragmented but Kehlmann is so deft that it flows beautifully, following Arthur Friedland and his two sons whose visit to a hypnotist when they boys are children has unforeseen consequences that will reverberate through all their lives.

them on my Baileys Prize wish list although the judges disagreed. Impoverished and homeless, Charles Rennie Mackintosh and his artist wife Margaret spent the first year of the First World War on the Suffolk coast at Walberswick. Freud tells their story from the point of view of Thomas Maggs, the thirteen-year-old son of a local publican with whom the Mackintoshs strike up a friendship. Such a shame to see that the beautiful hardback jacket has been swapped for a rather prosaic image.

Set on the Norfolk coast, not so very far from Walberswick, Sarah Perry’s After Me Comes the Flood was another surprising omission from the Baileys longlist. Its premise is enticing enough and it’s beautifully written, too. A middle-aged man exhausted by the seemingly endless heatwave that’s hit London shuts up shop and heads off to his brother’s house in Norfolk. He’s forgotten to take a map but is convinced he knows the way until his car breaks down miles from anywhere. He spots a house on the horizon and makes for it only to find himself welcomed as if he’s expected and ushered into a room which has been prepared for him where he finds boxes labelled with his name.

The last two are by American authors, the first of which has a title that I’m sure has been mangled constantly up and down the land: Judy Chicurel’s If I Knew You Were Going to be This Beautiful I Never Would Have Let You Go. It’s the title of the final chapter of the book whose meaning becomes clear towards its end. Set in the summer of 1972, If I Knew… is narrated by Katie, the adopted daughter of a white-collar family who spends her time in Elephant Beach’s rundown Comanche Street, a district frequented by drunks and druggies. It’s an episodic novel which draws you in nicely.

Finally, Amy Bloom’s much more manageably titled Lucky Us follows Eva whose mother dumps her unceremoniously on her father’s doorstep. Beginning in 1939, it’s a story of tangled relationships stretching over a decade. Lucky Us has an empathetic quality which makes its many flawed characters both attractive and believable.

That’s it for June paperbacks, a rather longer post than I’d intended but too short to spread over two. A click on first two titles will take you to Waterstones website for a more detailed synopsis; the rest are reviewed on this blog. If you want to see which June hardbacks I’m eagerly anticipating, they’re here and here.