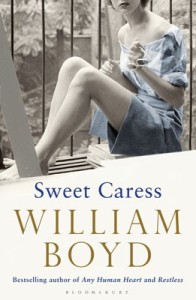 Just back from my Baltic states jaunt – of which more in a few days – and barely unpacked so here’s one I made earlier. September’s traditionally a big month for publishing – Christmas is on the horizon for booksellers even if the rest of us are busy sticking our heads in the sand and ignoring it. Consequently there are some starry names shining out from the schedules but you won’t find all of them here, just the ones that appeal to me.

I’ll kick off with a novel by one of those stars, albeit one I’ve become a bit disenchanted with lately. I was a great fan of William Boyd’s Restless, the first of his novels that could be called a thriller. He’s continued in that vein for the last three or four books but the novelty’s worn off for me; Waiting for Sunrise very nearly put the kybosh on my Boyd fandom. Sweet Caress, however, looks like a welcome return to Any Human Heart territory. It follows the life of Amory Clay  whose Uncle Grenville fills the gap left by her emotionally and physically absent father and who gives her a camera setting her on a path that will take her from snapping socialites in his London studio to Berlin in the ’20s, New York in the ’30s and on to a career as a war photographer. Lovers, husbands and children flesh out a life fully lived, apparently. Sounds like a thoroughly enjoyable return to form to me.

Truth be told I’ve also fallen out of sympathy with Margaret Atwood’s novels over the past few years but I like the look of The Heart Goes Last. It’s about Stan and Charmaine, living in desperate economic straits. An advertisement for the Positron Project, a social experiment offering stable jobs and a home, seems to be the answer. All they have to do is give up their freedom on alternate months, swapping their home for a prison cell. Soon they’re in the 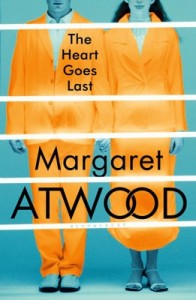 grips of an obsession about the couple who live in their house when they’re not there. ‘A sinister, wickedly funny novel about a near-future in which the lawful are locked up and the lawless roam free’ according to the publishers.

Published a few years ago, Gregoire Delacourt’s charming The List of My Desires had a super-sweet jacket but a nicely sharp edge. In The First Thing You See young car mechanic Arthur Dreyfuss opens his apartment door one day to find a distressed Hollywood starlet but neither Arthur nor Jeanine Foucamprez, with her fake American accent, are quite what they seem. I’m hoping for some thoughtful insight wrapped up in a nice little story.

This one may seem an obscure choice but Beate Grimsund’s A Fool, Free sounds intriguing. It looks at mental illness through Eli Larsen, a talented and successful author and film-maker who has heard the voices of Espen, Erik, Prince Eugen and Emil in her head since she was a child, but kept them secret. Described as a ‘candid and beautiful novel’, Grimsund’s book won the Norwegian Critics Prize. 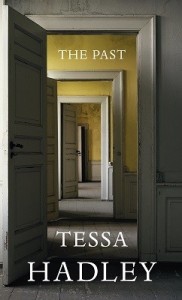 I’ve enjoyed all five of Tessa Hadley’s novels. She writes the kind of quietly intelligent books packed with shrewd observations that I associate with Carole Shields. In The Past three sisters and a brother share a few hot summer weeks together in their grandparents’ old house which is to be put up for sale. Inevitably all does not run smoothly as past and present tensions take hold. I expect lots of entertaining sniping amongst the reminiscing, and we’re promised ‘an ugly secret in a ruined cottage in the woods’. Sounds excellent.

That’s it for the first batch of September titles – a click on the title will take you to Waterstones website for a more detailed synopsis should you be interested. And if you’re still catching up with August, here are the hardbacks and here are the paperbacks. Part two will be here in a week or so.