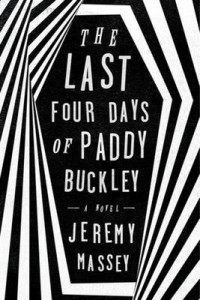 This one’s a little outside my usual literary purview. It’s a smart little black comedy all wrapped up in a thriller with a bit of a love story thrown in. The title puts you in the picture: Paddy Buckley is an undertaker who has landed himself in deep trouble with Dublin’s chief gangster and is facing his imminent demise. Jeremy Massey’s novel tells the story of what may well be the last four days of Paddy’s life and how an upright citizen whose mid-October Monday starts with a routine callout came to be in this predicament. You’ll have to suspend your disbelief at times but if you can do that you’re in for a lot of fun.

Paddy Buckley works for Dublin’s most respected funeral director as did his much-loved father before him. Paddy’s done his time in the embalming room and now calls on the bereaved, summoning all the tact and delicacy necessary to help them make arrangements for their loved ones’ funerals. He’s no stranger to loss himself. Eva, his heavily pregnant wife, collapsed and died two years ago leaving Paddy bereft and insomniac, unable to get over her death. On the Monday morning in question he’s been called to the home of a well-known artist. Things taking a surprising turn, then an even more surprising one, leaving Paddy somewhat discombobulated, concerned that his spotless reputation may be besmirched. His night is disturbed by a call to a nursing home to pick up a body. On the way home, exhausted and preoccupied, Paddy knocks down a man, killing him instantly.  Grim enough, you might think, but worse is to come. The victim’s wallet, stuffed with 20,000 euros, reveals that this is Donal Cullen, beloved brother of Dublin’s most feared gangster. What follows is Paddy’s attempt to evade Vincent’s ire, entailing nerves of steel, out-of-body experiences, a gorgeous dog and a great deal of quick thinking.

Massey is a third-generation undertaker who clearly knows a great deal about the business, weaving all sorts of arcane bits and pieces through his entertaining caper including a graphic description of embalming. The Undertaker’s Daughter popped into my head several times. Paddy is a thoroughly engaging character, an honourable man caught out by circumstances which lead him into a mire of duplicity, more than capable of thinking on his feet. It’s a very funny novel which keeps you hoping that despite his many prophecies of the dire fate that awaits him, Paddy will somehow pull through. Obviously, I’m not going to tell you the ending but I will say that Massey neatly ties together all those bits and bobs of funeral lore, including the embalming. Great fun, and just the thing when you’re faced with a constant stream of interruptions as I was when I read it. Excellent film material, too.

12 thoughts on “The Last Four Days of Paddy Buckley: A nice slice of Irish black comedy”