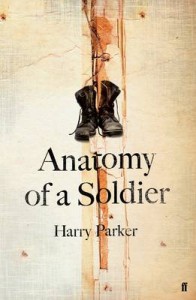 It took some persuasion to get me to read this novel. When it was pitched to me it seemed a) too clever for its own good and b) up an entirely different alley from mine but it’s published by Faber who know what they’re talking about when it comes to literary fiction so I thought what the hell. UK readers may well have heard all about it by now – lots of publicity including a spot on Channel 4 News and Radio 4’s Today programme meant it was much talked about on publication. Deservedly so, as it turns out. Harry Parker is a veteran of both the Afghanistan and Iraq wars: Anatomy of a Soldier is the story of Captain Tom Barnes who steps on an improvised explosive device – just as Parker did – told from the point of view of forty-five objects.

The novel opens with the tourniquet which Tom’s comrades tie tightly around what’s left of his leg, waiting for the medics to arrive. It’s spent eight weeks, two days and four hours in the pocket of his trousers and will be burnt as surgical waste once the doctors begin their work. This is Tom’s third tour of duty. He’s settled himself in, chatted with his men, read letters from home, endured the boredom of war punctuated with moments of fear and adrenaline when out on operations. He‘s talked to the man who manages the village irrigation system and been helped by the man’s son who fears for the friend who has been drawn into the insurgency by the promise of much-needed cash. When Tom steps on the IED he’s first treated in a field hospital, then shipped home for further surgery before the long and arduous process of rehabilitation begins. By the end of the novel, he has found his way to a life that is entirely different but no less rewarding.

You may share my initial scepticism about the structure Parker uses to unfold his story but it works extraordinarily well and continues to work through all forty-five objects which range from Tom’s boot to his mother’s handbag, his occupational service medal to the IED’s detonator. By telling his story in this way, Parker manages to be both objective and extraordinarily vivid in his descriptions of what happens to Tom and to the villagers. It’s not a linear narrative but Parker is careful to tie in any loose ends, weaving the villagers’ stories into Tom’s in a compassionate, empathetic way – quite remarkable given his own experience. The writing is striking at times – a boot observes ‘other boots like me fidgeted under the table’ before the company ships out; a respirator sees that other patients’ ‘bodies were disfigured, too, and did not fill the beds as they should’. Parker conveys emotion beautifully, recording the prosaic exchanges hiding fear and worry as Tom’s father shaves his son in hospital. Towards the end, as Tom has a drink with a civilian friend who commiserates with him he says ‘If the men who did this to me walked in here right now, … … I’d offer them a drink’. Hard for those of us who’ve never been through such an experience to understand such a reaction but my hope is Parker is articulating his own feelings. Altogether a thoroughly impressive and inventive piece of work. Not an autobiography but it’s impossible not to think of Parker’s own experience when reading it.

That’s it from me for this week. H and I are off to Nice tomorrow for a few days, hoping that a little spring sunshine will finish off my flu recuperation. Thanks to all those kind people who wished me a speedy recovery after Monday’s post and many commiserations to those who knew only too well what I was talking about.

18 thoughts on “Anatomy of a Soldier by Harry Parker: A life in forty-five objects”