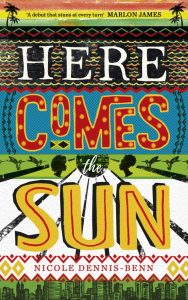 Nicole Dennis-Benn’s debut comes from the same publisher as Marlon James’ Man Booker Prize-winning A Brief History of Seven Killings, complete with a ringing endorsement from Mr James himself on its inviting jacket. Set in Dennis-Benn’s native Jamaica in 1994, it’s been picked by the BBC as one of its ‘ten new beach reads to devour’. I’m not a beach read devourer – is that a word? – but it’s something I associate with fluffiness or thrillers rather than tragedy on a Shakespearian scale which is what Here Comes the Sun turns out to be.

Margot works at Montego Bay’s Palm Star Resort. Ambitious, smart and efficient, she has a more lucrative trade on the side, offering special services to male guests while her long-running affair with Alphonso Wellington, the hotel’s owner, is a more open secret then she realises. Margot has her sights set on the hotel manager’s job and is prepared to do whatever’s necessary to get it, ploughing everything she makes into her sister Thandi’s future. Fifteen-year-old Thandi is a star pupil at the convent school, caught uncomfortably between the poverty of River Bank where the two sisters live with their mother Dolores, and the privileged lives of her schoolmates, fitting into neither. Margot is determined to shield Thandi from the sexual exploitation of her own childhood while Dolores sees her younger daughter as her ticket to an easier life. As Alphonso expands his empire, River Bank comes under threat but Margot sees a way to realise her own ambition, failing to understand its price. Meanwhile, Thandi does what fifteen-year-olds do – she falls in love.

Here Comes the Sun is not the breezy novel you might expect from its ‘beach read’ billing. There’s a good deal of racism, homophobia, and sexual exploitation which can feel a little relentless but the indomitable Margot keeps you reading. Despite her many flaws, hers is a sufficiently rounded character to engage both sympathy and a degree of admiration. The line between the luxury and indulgence enjoyed by the island’s tourists and the destitution just outside the resort’s compound is sharply drawn, the opportunism of Jamaica’s more privileged class acutely portrayed: ‘They have the accents of moneyed Jamaicans, their English with the right edge of patois to sharpen their innuendos and help them appeal to the common men they exploit’. Jamaica is characterised as a thoroughly corrupt society, from the lazy exploitation of Alphonso, happy to recruit River Bank’s most beautiful girls to satisfy his guests’ desires, to Dolores’ turning a blind eye – or worse – to her daughter’s abuse. Something of a bleak view, then, but given that Dennis-Benn was born and raised on the island, an accurate one, presumably. It’s an engrossing, eye-opening novel: just don’t expect a nice, sunny, feel good read.

8 thoughts on “Here Comes the Sun by Nicole Dennis-Benn: Women on the edge”