I have to admit it was nostalgia that drew me to Roland Buti’s Swiss novella set in 1976. Anyone who was alive and conscious in that year will remember the long hot summer which those of us not yet working luxuriated in throughout Europe. Rather more recently, H and I were walking in the Swiss Alps through a similar landscape to the one in which Buti has set his story of the Sutters who have farmed the same patch of land for many years but for whom the events of 1976 will prove momentous.

Thirteen-year-old Gus spends the summer holidays helping his father and his cousin Rudy who has Down’s Syndrome. He visits the family’s ancient horse with whom his grandfather sleeps in a nearby stable, preferring to bed down in hay than stay in his flat. When a young woman turns up, clad in a long patchwork dress and spouting hippie ideas, Rudy becomes besotted but it’s Gus’ mother who’s the object of Cécile’s attentions. His taciturn father becomes increasingly morose until village tittle-tattle proves too much. His wife moves out, his daughter throws herself into practicing for a school concert and Gus frets about what’s to become of them all. Meanwhile, the aged dog faints from the heat, the new chickens roast in their hen-house and the sun beats relentlessly down. The inevitable storm brings disaster with it.

Buti unfolds his story from Gus’ perspective as he looks back on the dramatic events of that summer. His language vividly summons up the deadening heat: ‘The yellow sky, the yellow fields, the car splitting the yellow air on the yellow road… They were all unreal’. Gus’ father is wedded to a way of life that’s fast passing, his plans for a future farming chickens blown apart by the cataclysmic weather. He’s left bereft, puzzled and angry by the behaviour of his wife, unaware of her long unhappiness: ‘Mum was always busy with a multitude of tasks that no doubt helped to keep her from feelings of despair’. There’s a nice thread of humour running through the novel lightening its tone, from the fainting dog to Rudy’s spit-polished red apple handed to Cécile as a token of his adoration. Altogether an enjoyable read and not just because of a double dose of nostalgia. 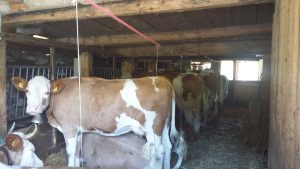 Speaking of which, Buti’s novel brought back memories of the farm where we stopped for the last lunch of our holiday. We had a cheese plate, looking out at a fabulous view then across to the open stable at the cows who’d produced what we were eating. Idyllic for us, hard work for the family that ran it.

15 thoughts on “Year of the Drought by Roland Buti (transl. Charlotte Mandell): Coming of age in 1976”