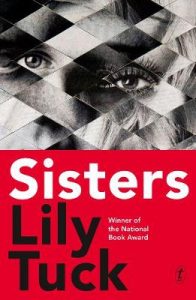 It took me a mere ninety minutes to read Lily Tuck’s Sisters which might lead you to think it’s a slight, inconsequential piece of fiction but that’s far from the case. A sharp psychological study of obsession with a neat sting in its tail, it’s completely riveting.

Our unnamed narrator is married to a man with whom she started an affair after meeting him at a dinner party his first wife chose not to attend. They’ve been married for some time, long enough for her to have seen her stepson from early teenage years through to graduation and help her stepdaughter choose her wedding dress. She’s obsessed with his first wife: taking her stepson’s text book across town to get a glimpse of her apartment; calling her on the phone, then hanging up; researching her old piano teacher. How happy was this woman whose photograph she sees every day? What is her life-like now? How did she feel about burying her musical talent in housewifery? Was she better in bed? A litany of speculation preoccupies our narrator about her predecessor, so different from herself.

Tuck’s novella is made up of a series of short fragments, often just a few lines occupying the entire page.  A great deal is left unsaid and yet a picture emerges of a woman caught up in an obsession, at once unsettling and understandable. The writing is pinpoint sharp, the depth of obsession beautifully conveyed:

In the photo of her pushing the baby carriage down Avenue Foch in Paris, it was hard to tell – even with a magnifying glass – whether she looked happy.

Tuck’s ability to convey characters while saying barely anything about them is remarkable. The two wives emerge as far more interesting than their self-absorbed, insensitive husband. The connection our narrator yearns for with his first wife far deeper than the one she shares with him. This is such an elegant, quietly devastating piece of fiction. Inevitably, Daphne du Maurier’s Rebecca springs to mind and is given a polite nod by our narrator:

I dreamed – not that I went back to Manderley – that I was in a big city like Calcutta or Bombay in India.

I’ve been left wanting to read as many of Tuck’s novels I can get my hands on.

16 thoughts on “Sisters by Lily Tuck: A tale of obsession”