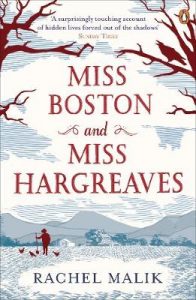 Rachel Malik’s debut has been sitting on my shelves waiting to be reviewed for quite some time. I was sent a copy a few months after its hardback publication when Malik approached me and I warily agreed to look at it. I’ve learned my lesson in this respect but an old friend had reviewed the novel positively in the Sunday Times which swayed me and Heavenali’s review sealed the deal. The old bookseller in me thought it would be better to hold back a review until the paperback edition appeared, and now it has.

Elsie Boston has run the family farm alone for many years. She’s a little eccentric and deeply introverted, living on the edge of the village in every sense. Struggling to keep the farm afloat, she decides to take on a Land Girl and waits nervously for her arrival, wondering how she will cope with a stranger. Rene Hargreaves is a Manchester girl who has left her gambling husband and three children, passing herself off as a widow. These two find a way to accommodate their very different habits, settling into a routine of evening Patience and listening to the radio with Rene spending her afternoon off at the pictures. By the time Elsie is forced off the farm by her opportunistic neighbours, their lives have become so entwined that they leave together, embarking on fifteen years as itinerant farm workers until they settle in Cornwall in 1958, almost two decades after they met. Life settles back into its usual routines – Elsie keeping herself to herself, Rene off to the pictures once a week – until Rene learns of the death of a close family friend to whom she owes a debt of gratitude. Despite her antipathy towards him, Rene knows she and Elsie must take in Bertha’s ageing, alcoholic husband who sets about disrupting their life. When Ernest finally dies it might almost seem a cause for celebration but then the police arrive.

In her historical note at the back of the book, Malik explains that Miss Boston and Miss Hargreaves is based very loosely on her grandmother’s life, knowledge which makes her novel all the more poignant for this is not always a happy story. Smoothly shifting perspective back and forth between Else and Rene, threading their memories through her narrative, Malik combines quietly understated prose with appropriately cinematic, vivid episodes. The passage in which Rene and her friend stumble onto a film set, charming the crew and triggering a life-long passion for the movies, is quite magical. The relationship between Elsie and Rene is delicately sketched, its changes subtly shaded in. Their lives were so very ordinary, except perhaps in one or two respects sums up these two women beautifully as it must have for many other couples like them, discreetly living their lives together. As Elsie says in court to much sniggering derision We were rich, and indeed they were. A touching, thoroughly absorbing novel – I’m looking forward to reading what Malik comes up with next.

12 thoughts on “Miss Boston and Miss Hargreaves by Rachel Malik: ’We were rich…’”

London Made Us by Robert Elms
The Penguin Book of Japanese Short Stories (ed. Jay Rubin)
We Shall Not All Sleep by Estep Nagy