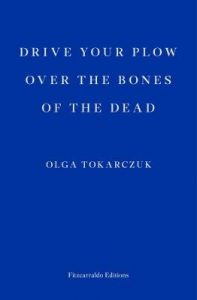 Keen readers of translated fiction will recognise Olga Tokarczuk as the winner of this year’s Man Booker International Prize but it was Drive Your Plow Over the Bones of the Dead’s backdrop that attracted me to it. It’s set in southwest Poland, not too far from WrocƗaw where H and I spent a few days of our last railway jaunt. In case you’re wondering about the spelling in the novel’s title, it’s derived from a William Blake poem, one of its narrator’s passions along with astrology and animals.

One winter’s night Janina Dusezjko is woken by a hammering on her door. It’s Oddball, her taciturn neighbour, asking for help with the local poacher who he’s found dead in his house across the way. Janina and Oddball wrestle the corpse into respectability, dressing it in a suit before contacting the police. Janina is convinced that Big Foot has been murdered as an act of retribution by the deer whose fellows he’s spent a lifetime hunting. She’s a fierce protector of animals, furious with the hunters who carelessly shoot them, leaving their carcasses to rot. As the seasons wear on, she continues her caretaking duties, spends a day a week teaching, enjoys her weekly suppers with Dizzy, a keen translator of Blake, casts horoscopes and misses her dogs who disappeared not long before Big Foot’s death but events in the remote valley where she lives take a dark turn. Bodies are piling up: first the police commandant, then a couple of businessmen and finally the priest. Rumours of corruption are rife but these four men all have one thing in common which holds the key to their demise.

Tokarczuk tells her story through the singular voice of Janina who hates her own name and dubs others with tags that she feels are more fitting. She’s an eccentric character, written off as an ‘elderly old bat’ by the police for her theories of animal revenge and insistence that everyone’s lives are written in the stars. Tokarczuk carries her narrative off with a good deal of humour while making serious points about hunting and hinting at corruption in Polish society, the murder motive which tops the town’s gossip list. There’s a thread of suspense running through the novel, all neatly resolved at the end, but her skill is in the creation of such an idiosyncratic, engaging narrator. Tokarczuk has described this novel as much more traditional than Flights which bagged her the Man Booker International Prize, a book I may have to investigate.

19 thoughts on “Drive Your Plow Over the Bones of the Dead by Olga Tokarczuk (transl. Antonia Lloyd-Jones): Animals have rights, too.”