After our long railway jaunt around central Europe earlier in the year H and I both fancied settling in one place for a week. Despite having spent three enjoyable holidays in North Norfolk in four years, we’d not been back in almost a decade: a return visit seemed ideal. We set off on one of those gorgeous autumn mornings, arriving in Blakeney in the late afternoon only a little discombobulated by the ‘axe-throwing escape rooms’ sign just outside Kings Lynn.

marshes to the sea. On a clear night the stars are spectacular, something we never see at home thanks to all that ambient light thrown up by the town. It’s also home to lots of pretty villages, many with delis offering treats, plus the small town of Holt which still boasts a proper department store. None of your brand concession nonsense at Baker and Larners.

We already had a catalogue of walks in our heads, the favourite of which for me is a circular hike beginning at Wells-next-the-Sea continuing to Holkham and back up the beach past Wells’ colourful beach huts whose numbers seemed to have expanded greatly since our last visit. One of the joys of this walk is watching lots of happy waggy dogs cavorting on the beach although they, like us, were having a bit of trouble with the buffeting wind. 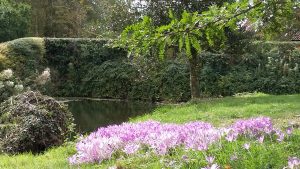 gorgeous gardens, far more lovely than we were expecting with its beautifully ordered kitchen garden, groaning with produce, and autumn crocuses scattered across lawns surrounded by a moat.

some time. The collection is housed in Norman Foster’s first building, still looking good despite its fortysomething years. Only a smattering of artefacts is on display from the vast collection but it’s beautifully curated. My favourite piece was a miniature Peruvian lama fashioned in silver c. 1400-1532. The afternoon was spent wandering around Norwich which is far enough away from anywhere else to have retained its character. It even has a little outbreak of Art Nouveau.

And the book? Sad to say that not nearly as much reading was done as either of us had hoped thanks to our cottage’s crepuscular lighting, clearly not designed for readers. I did manage to get stuck in to Emma Flint’s Little Deaths set in ’60s New York. Based on a true crime, it’s the story of a double child murder told from the perspective of the children’s mother whose apparently louche lifestyle puts her in the frame and the rookie reporter who shoulders his way into covering the crime and becomes obsessed by her. Not usually my cup of tea but it’s deftly handled and engrossing.

An enjoyable break, then, despite the blowing about by Storm Ali. I’m enjoying the current spell of sunny autumn days before knuckling down to winter. Long may it last.