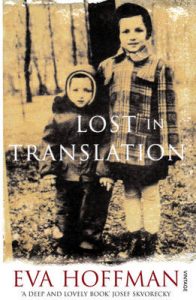 This is the latest in a series of occasional posts featuring books I read years ago about which I was wildly enthusiastic at the time, wanting to press a copy into as many hands as I could.

Lost in Translation is my first non-fiction blast from the past. It was published in the UK shortly after I became a bookseller and was one of the first books in huge demand that I felt I must read. It’s about many things one of which is the nuance of language, a subject dear to many readers’ – and of course writers’ – hearts.

At the age of thirteen, when most of us are beginning to forge an identity for ourselves, Eva Hoffman was uprooted from her beloved Poland to emigrate with her family to Canada. Born in 1945, her early years had been spent in Kraków, surrounded by friends, thoroughly immersed in a way of life she knew and loved. When she arrived in Vancouver, she had not only to learn a new language, but also a very different set of cultural references, a long, slow process which set her at a distance from other young people. When she won a scholarship to a university in the United States, she began to find ways of belonging in her new world without rejecting the old. Lost in Translation is an eloquent account of Hoffman’s experience of being caught between two cultures.

I’ve tried reading several of Hoffman’s novels over the years but none have made the impression on me that her memoir left. It’s come to mind often in the last few years when thinking about the refugee crisis and the cultural dislocation so many have had to face on top of their trauma.

14 thoughts on “Blasts from the Past: Lost in Translation by Eva Hoffman (1989)”