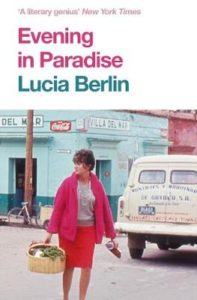 Sadly, paperbacks on offer this September are as disappointing as new titles for me. Just the smallest of handfuls appeals, one of which I’ve already read, I owe my short story conversion largely to Lucia Berlin’s A Manual for Cleaning Women. Given that she died in 2004, I’d assumed that was it and so was delighted when Evening in Paradise turned up. Comprising twenty-two stories, it lacks the more detailed biographical notes included in A Manual for Cleaning Women but it’s clear that it also draws on her own life and what a rackety life it was: several marriages, four children and alcoholism followed a peripatetic childhood spent in mining towns with a brief glamorous teenage period in Chile. Even if you’re not a short story fan, please do give Berlin’s writing a try. It’s superb.

Lidia Yuknavitch’s Dora: A Headcase is billed as a coming-of-age story which draws on Freud’s famous case study of the eponymous young woman. Ida is secretly in love with her best friend but is struck dumb or faints whenever intimacy appears on the horizon. Her father sends her to a shrink but Ida, together with her alter ego, Dora, sets about subverting Siggy’s head games by covertly filming him. The result goes viral and Ida finds herself the victim of hackers.  ‘Yuknavitch’s Dora is radical and unapologetic – you won’t have met a character quite like her before’ say the publishers. It sounds intriguing.

I do like a good satire but one which deals with war is  tricky to pull off. The Guardian

clearly thought that Mohammed Hanif managed it with Red Birds, naming it one of their books of last year. An American pilot crashes his plane in the middle of the desert and is taken in by the very refugee camp he was supposed to bomb. Major Ellie finds his views turned upside down by both refugees and aid workers, by the sound of it, in what the publishers describe as a ‘savage, irreverent and deliciously dark’ novel.

And that, I’m afraid, is it for September. A click on Evening in Paradise will take you to my review and to a more detailed synopsis for the other two. If you’d like to catch up with new titles, they’re here. With publishers’ marketing eyes firmly fixed on Christmas, I’m sure October will offer a plethora of potential goodies to make up for September’s dearth. At least, I hope so.

19 thoughts on “Paperbacks to Look Out for in September 2019”