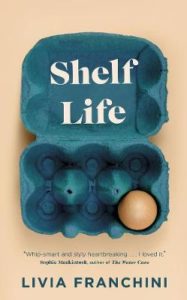 I’m an inveterate list maker. It’s my way of organizing myself and remembering to do things. And I always make a list before shopping. Who knows what I’d come home with otherwise? Hardly surprising, then, that I was attracted to Livia Franchini’s Shelf Life which tells Ruth’s story through the shopping list she made the week her fiancé dropped his bombshell and left her.

Ruth and Neil have been together for ten years. He’d spotted her through the window of the travel agent he worked for just yards from her nursing school, engineering a meeting through her friend Alanna. Ruth had been working as a senior nurse at a care home catering to the aged rich for some time when Alanna popped up in her live again after a long absence. Theirs is an uneasy friendship: Alanna is a girly girl, given to confidences, indiscretions and beautiful with it; Ruth is intensely private, responsible and mousey. Struggling to find a way to live on her own after Neil’s departure, supposedly to a Cornish mindfulness commune, Ruth hides her misery the best she can. When Alanna announces her own engagement, Ruth’s astonished to be asked not only to be her maid of honour but to arrange the hen party which sees her entering a foreign land of cocktails, clinging dresses and hedonism. Things take a dark turn that night and another the following morning as Ruth nears the end of her list.

Taking a shopping list as a structure for your debut novel is a daring tack to take – lots of potential for clunkiness – but Franchini handles it well. I began her novel looking for the link with each item but her story drew me in so that I forgot about all that. Ruth’s character is well drawn and carefully constructed, her friendship with Alanna smartly done. There’s much more to Alanna that you might at first think. Neil has his own say, leaving you wondering why Ruth hadn’t kicked him out years ago then remembering her loneliness. Woven through Ruth’s narrative are email exchanges, texts and chats from Ruth’s schoolmates, most of which work well but some felt a wee bit contrived. Through it all runs a vein of nicely judged humour culminating in the hen party which sets readers up well for the shock that ensues. With its poignant depiction of social awkwardness and isolation, Shelf Life is far from the slightly fluffy read I’d somehow assumed it to be and all the more interesting for it.

10 thoughts on “Shelf Life by Livia Franchini: A list for life”