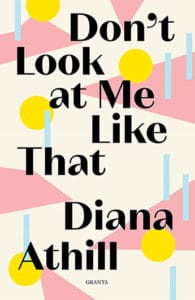 Unusually for me, my first 2020 review is of a book published last year, although to be strictly accurate, Diana Athill’s Don’t Look at Me Like That was first published in 1967. It’s her only novel and, given how much I admire her writing, I’m amazed that it took me so long to get around to it. It was December’s reissue, with what Athill’s generation might have called its ‘jazzy’ new jacket, that finally kicked me into action. This neatly crafted, compelling novella tells the story of a woman coming into herself in 1950s London, exploring themes of love, friendship and betrayal.

Meg Bailey is the daughter of a country parson and a baronet’s granddaughter who has never quite reconciled herself to her demoted social status. Sixteen-year-old Meg has just one friend, Roxanne Weaver, who invites her home to Oxford where her mother holds regular salons, pleased with her own erudition. The two friends are escorted to a dance by the rather dull Wilfred and Dick, Roxanne’s second cousin, who indulges Mrs Weaver in sparring repartee. This is Meg’s first adventure away from the rectory which she greets with a mixture of excitement, anxiety and a determination to learn how to behave in society. Two years later she’s living in Oxford with Roxanne, studying at art school which leads her to a job in London working in design. Roxanne remains in Oxford, marrying Dick, just as her mother had planned, while Meg finds herself a room in a chaotic household, warmly welcomed by the impoverished Lucy, deserted by her husband with three children to support. Meg continues to watch and learn, determinedly losing her virginity, brushing aside all declarations of love until she falls for someone who could hardly be more inappropriate.

Roxanne had accepted something which I had never thought of: that life could be as it ought not to be, and that one still had to live it.

Meg disarmingly introduces herself as an unpopular young girl, thought standoffish by her fellow schoolmates. She’s a curious mixture of superiority and lack of confidence, often failing to understand how her own careless behaviour and slippery hold on morality might affect others. Hers is an unconventional life, turning her back on marriage and children in contrast to Roxanne, although finding herself caught up in another sort of entanglement. Athill’s novel offers a fascinating insight into the lives of a certain class of British woman in the mid-twentieth century: the constraints of the expected path and the cost of not following that path. Her fiction is as elegant and witty as her memoirs and her characterisation sharp. It’s a short yet immersive novel whose ending is quietly devastating.

10 thoughts on “Don’t look at Me Like That by Diana Athill: A welcome reissue”