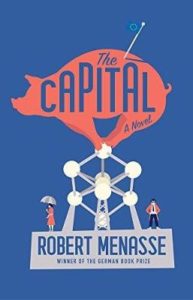 The first batch of February’s paperback goodies didn’t set foot outside America but this second instalment starts in the heart of Europe with Robert Menasse’s The Capital, something of a bittersweet read for me given my country’s Brexit shenanigans. This sprawling novel takes a sharply satirical view of the European Commission, exploring its many accumulated weaknesses before returning to the founding values which make me want to remain part of the EU’s flawed club, sadly no longer a possibility. Like the institution it’s satirising, Menasse’s novel is not without faults but there’s much to enjoy.

Set in West Berlin during the summer of 1989, Ben Fergusson’s An Honest Man follows eighteen-year-old Ralf who is enjoying a summer of freedom until he discovers something about his family which turns his life upside down. ‘As old Cold War tensions begin to tear his life apart, he finds himself caught up in a web of deceit, forced to make impossible choices about his country, his family and his heart’ according to the publishers. Regular readers may have noticed that a Berlin backdrop is catnip for me

It was its Berlin setting that initially attracted me to Clare Clark’s In the Full Light of the Sun. In 1923 newly divorced Julius Köhler-Schultz, pillar of the art establishment, meets a young dealer, apparently respectful of his expertise and eager for his assessment of a painting he wants to sell. Based on the case of Otto Wacker, Clark’s engrossing, perceptive novel explores the machinations of the self-regarding art world taken in by an audacious fraud against the background of the failed Weimar Republic and the rise of the Nazis.

Christine Dwyer Hickey’s The Narrow Land is about the marriage between two artists – one acclaimed, the other not. The summer of 1950 was one of many Edward Hopper spent with his wife, Josephine, on Cape Cod but this year a ten-year-old German war orphan, traumatized

by war, has come to stay with their neighbours. Written in Hickey’s subtle yet precise style, unshowy and often appropriately painterly, it’s a pleasingly nuanced novel which I enjoyed very much.

Back to Europe for Isabella Hammad’s The Parisian which is something of a doorstopper, the kind I’d usually avoid, but Zadie Smith has praised it to the skies so I think I might have to give it a try. It follows a young Palestinian from the Middle East to Paris during the First World War. ‘Hammad delicately unpicks the tangled politics and personal tragedies of a turbulent era – the Palestinian struggle for independence, the strife of the early twentieth century and the looming shadow of the Second World War’ say the publishers. Apparently, Smith has never spoken of a student in such glowing terms in the fifteen years she’s taught.

I’m not entirely sure about Sadie Jones’ The Snakes, either, having failed to see what so many others did in The Outcast, her much-praised debut. Bea and Dan have rented out their flat for a few months and driven to France where they plan to visit Bea’s brother at his hotel. When they arrive, they find Alex alone and the dilapidated hotel empty. The arrival of Bea and Alex’s rich parents makes Dan wonder why he’s never met them before. All of which may not sound very exciting but ‘tragedy strikes suddenly, brutally, and in its aftermath the family is stripped back to its rotten core, and even Bea with all her strength and goodness can’t escape’ say the publishers intriguingly. We’ll see. 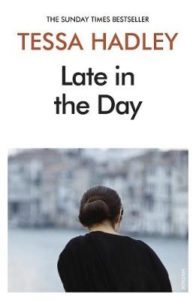 I’d also dithered about my last February paperback, Tessa Hadley’s Late in the Day. It’s not that I don’t enjoy Hadley’s writing but her books are set in a world that can feel a little too cramped for me however the premise of this one appealed. It follows a group of late middle-aged friends whose lives are blown apart and put back together in a very different way after one of them dies suddenly. Despite its small canvas, I enjoyed this latest offering with its hope of change and new beginnings emerging from the pain of grief and loss.

That’s it for February. A very satisfying month. A click on a title will take you either to my review or to a more detailed synopsis for any that have taken your fancy. If you’d like to catch up with the first instalment of paperbacks it’s here, new titles are here and here.

17 thoughts on “Paperbacks to Look Out For in February 2020: Part Two”