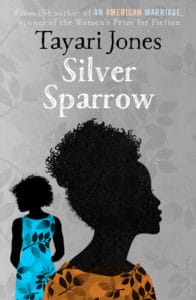 Originally published in the US back in 2011, Tayari Jones’ Silver Sparrow has been released here in the UK on the heels of Jones’ 2019 Women’s Prize for Fiction triumph. I wasn’t entirely sure I’d read it, not having been quite as impressed with An American Marriage as the judges, but its premise is an intriguing one: two teenage sisters become friends but only one knows that they share the same father. Hard to resist that.

James Witherspoon is a bigamist. Married to Laverne when she was pregnant at just fourteen, he stood up before a judge ten years later with Gwen, the woman he’d met when buying Laverne’s anniversary present. Fully aware of what they were doing, Gwen had been determined to give their daughter Dana some sort of legitimacy. Chaurisse was born four months after Dana, a longed-for child whose brother had been stillborn. These two grow up in very different circumstances: Chaurisse the child of parents proud of their success after a rocky start; Dana’s deeply resentful mother taking her on spying trips spent sneering at their less attractive but more secure counterparts. Every Wednesday, James and the man he regards as his brother, come to visit Gwen and Dana, Raleigh carrying a flame for Gwen. As the girls grow up, their worlds begin to overlap much to James’ apprehension, until they meet in the local mall as if by accident, one knowing a great deal about the other, both lonely in their own way. Chaurisse is flattered by the attention of this pretty girl but sometimes puzzled by her cageyness. What ensues will trigger aftershocks felt for years to come.

Jones explores themes of family, trust, honesty and identity through Dana and Chaurisse, as first one then the other tells their story, neatly balancing her novel. Given the Oprah-like set up, it could easily have descended into soap opera but Jones is much too skilled for that, sidestepping turning James into a monster although men don’t come out of this novel too well. The web of lies and deceit ensnares even Raleigh, the most loyal of men, making him complicit and dishonest.

The six of us were hog-tied, fastened in place by different knots

Richly complex, peopled with a cast of nuanced characters, Jones’ book steers clear of judgement treating its subject with compassion and empathy while injecting a slim vein of dry humour into each of her narratives, even at the most poignant of moments. I enjoyed An American Marriage but, for me, Silver Sparrow is the better novel. I’m hoping that Jones’ other two backlist titles will appear here in the UK if this one meets with the success it deserves.

21 thoughts on “Silver Sparrow by Tayari Jones: A tale of two sisters, secrets and lies”