Six Degrees of Separation is a meme hosted by Kate over at Books Are My Favourite and Best. It works like this: each month, a book is chosen as a starting point and linked to six others to form a chain. A book doesn’t need to be connected to all the titles on the list, only to the one next to it in the chain. 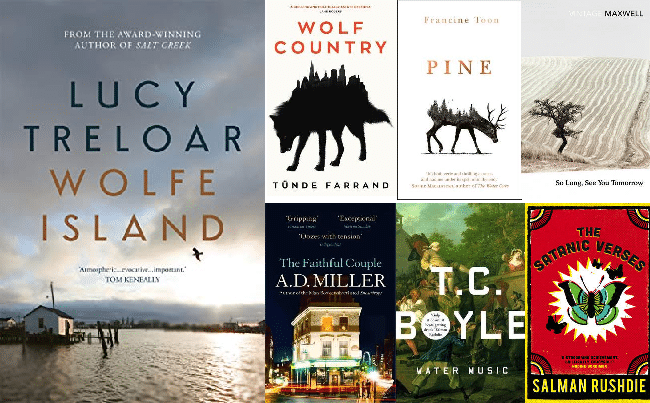 This month we’re starting with Lucy Treolar’s Wolfe Island which I haven’t read but I gather from the blurb is about a woman whose life lived alone on the eponymous island is disrupted by the arrival of her granddaughter together with two refugees fleeing persecution.

I’m taking a phonetic leap, losing the ‘e’ and landing in Tünde Farrand’s Wolf Country, a dystopian tale set in a world in the grips of rampant consumerism. All too plausible.

Toon is an editor turned novelist as was William Maxwell, author of So Long, See You Tomorrow, one of my favourite novels, about a friendship between two boys which turns sour

Picking up the theme of male friendship, which seems much rarer that the female variety in fiction, A. D. Miller’s The Faithful Couple is about two men whose twenty-year friendship is overshadowed by a dubious moral act committed in college.

Staying with authors who eschew their full name in favour of initials leads me to Water Music, my favourite novel by T. C. Boyle. Based on Mungo Park’s compulsive quest to find the source of the Niger, it’s packed with extraordinary characters who never seem to have a dull moment.

On the front of its current jacket, Salman Rushdie exhorts readers of Water Music to ‘gulp it down, it beats getting drunk’ which leads me to Rushdie’s notorious The Satanic Verses, the publication of which had all sorts of repercussions that neither its author nor publisher could ever have imagined.

This month’s Six Degrees of Separation has taken me from a woman living alone on remote island to a hugely controversial novel which led to its author living in an undisclosed location surrounded by armed guards. Part of the fun of this meme is comparing the very different routes other bloggers take from each month’s starting point. If you’re interested, you can follow it on Twitter with the hashtag #6Degrees, check out the links over at Kate’s blog or perhaps even join in.