Rather like Berlin, a New York setting is catnip for me. I only need to spot it in a novel’s blurb and it’s on my list which is not always a good thing. I’ve only visited the city once but I think it’s more its almost mythical aura that attracts me rather than the actuality not that I didn’t love it when I was there. You can be sure that there’ll be a Berlin post in this series at some stage but for now,

here are five of my favourite novels set in New York City, a couple with links to reviews on this blog.

Jonathan Galassi’s Muse is all about the New York book world, neatly satisfying two obsessions for me. Paul Dukach conceives a lifelong passion for Ida Perkins’ poetry as a teenager. Thanks to the well-connected Morgan, Paul finds his way into publishing world, soon gaining a reputation for his sharp editorial eye. He’s offered a job by Homer Stern, the louche, foul-mouthed owner of one of the city’s two most revered literary publishing houses, its lists stuffed full of Nobel Prize winners, but it’s Homer’s rival, Sterling Wainwright, who has an iron grip on the rights to Perkins’ work. By the end of the book Paul will have fulfilled his wildest dreams but not without a twinge or two of conscience. A poet and one of the head honchos at Farrar, Straus and Giroux, Galassi takes us into the world of literary publishing, replete with gossipy detail and sharply observed satire while posing questions about the nature of literary fame. A smart, funny novel written by a man who knows a thing or three about Paul’s world.

I fell in love with Brightness Falls to such an extent that I remember sending H off for a walk into the lovely Corsican maquis on his own so that I could finish it. It’s the first in a trilogy which continued with the disappointing The Good Life and finished with Bright, Precious, Days. All three follow Corinne and Russell Calloway, a glittering New York couple. To their friends, theirs is the perfect marriage but when Russell is caught up in an audacious plan to take over the publishing company in which he’s the rising editorial star, things begin to fall apart. The adrenaline-fuelled atmosphere of the deal takes its toll on both Russell and Corrine, just as the excesses of the ’80s have on many others in New York City, from their friend Jeff, now in detox, to the homeless crack addicts on every street corner. The reckoning finally comes on 19 October 1987 when the bubble bursts with the Wall Street crash. Tom Wolfe’s potboiler The Bonfire of the Vanities was often cited as the quintessential yuppie novel but for me Brightness Falls summed up the folly of the ’80s very much better and with a great deal more humanity.

Beginning in early 2001 Claire Messud’s The Emperor’s Children inhabits similar literary territory to Brightness Falls presenting a portrait of New York through the eyes of three thirty-year-old friends living in Manhattan. All of them once thought they had a bright future but none seems to have fulfilled that promise. Marina has spent the advance she was awarded and has returned home to live with her parents. Julius is subsidised by his boyfriend having failed to support himself with his reviews. Danielle is unemployed and involved with two men, one of whom is Marina’s literary critic father. The attacks of 9/11 throw all the cards up into the air for these three as it did for so many. Published several years after the atrocity, Messud’s novel captures the city both before and after this cataclysmic event in an immersive, satisfying novel.

Anna Quindlen’s Alternate Side takes us from literary New York to residential Manhattan where Charlie is cock-a-hoop having secured a space in the parking lot of the cul-de-sac where he and Nora have lived for a couple of decades. Theirs is a tightly knit community, tolerant of George, its self-appointed overseer, given to pushing instructions through their letter boxes about what other residents should and should not do. This privileged set of householders looks to the likes of Ricky, the handyman, to keep things ticking over smoothly. One day a shocking act of violence rocks the street, setting off fault lines in relationships that will undermine some irretrievably. With its perceptive exploration of middle-aged marriage, Alternate Side inhabits quintessential Quindlen territory. Overly ambitious comparisons abound in publishers’ blurbs, but Quindlen’s writing really does rank alongside Elizabeth Strout’s and AnnTyler’s for me. If you haven’t yet read her work, I hope you’ll give her try. 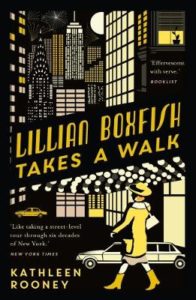 Kathleen Rooney’s Lillian Boxfish Takes a Walk takes us on a tour of Manhattan on New Year’s Eve in 1984 in the company of an 85-year-old who arrived in New York in the ’30s, beginning her career as a lowly copywriter for Macy’s and ending it as the world’s highest paid woman in advertising. Lillian’s evening has not gone as planned. Instead she decides to go for a stroll, telling us her life story as she walks and through it the story of half a century of New York’s history, encompassing the Jazz Age, the Great Depression and AIDS. I loved this novel which is, apparently, based on the story of Margaret Fishback. Lillian is a wonderfully witty and engaging character. Rooney’s book has a charmingly old-fashioned feel about it which seems a satisfying note to end on for me.

What about you – any favourite New York City novels you’d like to recommend?

I Will Be Complete by Glen David Gold
The Penguin Book of Japanese Short Stories (ed. Jay Rubin)
Snegurochka by Judith Heneghan
Ex-Libris by Michiko Kakutani