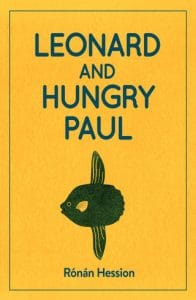 Rónán Hession’s Leonard and Hungry Paul had been sitting on my TBR shelves for far too long. Janet at From First Page to Last sent it to me and I’d meant to get to it before but somehow never did. Now seemed the perfect time given that I’ve edged closer to the cheery end of the fiction spectrum over the past few weeks. This story of friendship between two men in their thirties who regularly meet to play board games and chew the fat is hard to describe as anything but heartwarming despite my aversion to the word.

Leonard is a little at sea, left bereft by the death of his mother with whom he’d lived happily all his life. She brought him up alone, feeding his voracious curiosity with children’s encyclopedias which he now helps produce, translating the experts’ language into something children can understand. He often spends his evenings with Hungry Paul, also happily living with his parents, who earns his living filling in for posties when they’re sick or on holiday and reluctantly volunteers as a hospital visitor at his mother’s behest. Helen and Peter are caught up in the preparations for Grace’s imminent wedding. Grace longs for her parents to enjoy a retirement unconstrained by worry about Hungry Paul and his apparent dependence on them. Leonard and Hungry Paul chat over their board games, each quietly respectful of the other – Leonard encouraging Hungry Paul to enter the local Chamber of Commerce’s competition for an email sign-off and Hungry Paul listening to Leonard’s tentative hopes for a relationship with Shelley who works in his office. Over the lead-up to Grace’s wedding, Leonard will discover what he’d like to do with his life and Hungry Paul will find a surprising solution to Grace’s worries about him.

She taught him to look at life as a daisy chain of small events, each of which could be made manageable in its own way

Hession’s novel is filled with gentle humour and kindness. Both quietly reflective, Leonard and Hungry Paul think about things in rather different ways from typical men in their thirties: Hungry Paul is given to discursive musings and capable of living in the moment rather than worrying about the future; Leonard is still as curious as he was as a child, sensitive and careful if a little awkward with other people. Neither feels terribly at home in the modern world but by the end of this pleasing novel they’ve each found their niche. Hession writes with great affection for his characters, all of whom try to do their best for each other. It’s a novel which had me frequently smiling and giggling, unusual for me with such playful humour – it’s the smartarse or farcical kind that elicits that reaction. A lovely, comforting read, then – balm for a soul run a bit ragged by social media and the state of the world. Thanks so much to Janet for sending it my way.

17 thoughts on “Leonard and Hungry Paul by Rónán Hession: Another perfect comfort read”