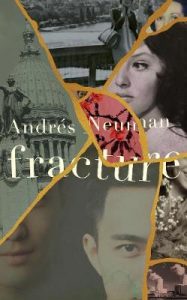 Part of my attraction to Fracture was its jacket which seemed to fit the title so beautifully. Andrés Neuman’s novel is largely set in Japan and, thanks to BBC4’s excellent series of documentaries about Japanese culture, I knew about the practice of kintsugi: repairing broken porcelain emphasising the cracks rather than disguising them as we Westerners would. Fracture follows Yoshie Watanabe, an elderly man who spent much of his professional life abroad, who finds himself exploring his past in the wake of the tsunami which triggered the Fukushima nuclear disaster in March 2011.

Yoshie is at a station when the earthquake hits, buying a ticket while enjoying the sound of tourists speaking a language he knows well from his time in the West. He finds his way home unscathed, learning from the news of a devastating tsunami which has killed thousands and damaged the Fukushima nuclear power station. As the disaster unfolds, Yoshie finds himself reflecting on his life. He’s a survivor of the Hiroshima conflagration that killed his father, narrowly escaping the destruction of his hometown of Nagasaki in which his remaining family perished. Raised by his uncle and aunt, Yoshi did well in his studies finding a job with an electronics company whose career ladder he climbed. His work took him first to Paris in the ‘60s, then to ‘70s New York, ‘80s Buenos Aires and finally Madrid. In each of these cities, Yoshie explored his adoptive country’s culture and language, embarking on relationships with four women each of whom are contacted in 2011 by a journalist keen to track down this man who has seen two forms of nuclear disaster in his lifetime. Meanwhile, Yoshie sets out on an odyssey to see the results of this second catastrophe, batting away the ceaseless stream of emails from an unknown man who seems to have been led to him by his ex-lovers.

Rather than someone who spoke different languages, he felt that he was as many different people as the languages he spoke

Written in clean, precise language, Neuman’s novel explores a multitude of themes through Yoshie’s experience. It’s meticulously constructed, shifting perspectives between Yoshie and each of the four women most important to him, revealing his character both through their memories and his own. Each of the women’s narratives builds a picture of their own politics, culture and experience – from Lorrie the American political radical to Carmen the matter-of-fact physiotherapist – as well as Yoshie’s response to their country. Themes of war and its aftermath, interconnection, dislocation and memory overarch this satisfying, intelligent and humane novel whose quiet tone creates an affecting intimacy. Such an impressive mature piece of work, rich in cultural references. Just one criticism, of the publisher rather than the novel: there’s no mention of the translators either on the title page or cover. Such a shame given the attention to detail shown in choosing that jacket which couldn’t be more fitting.

6 thoughts on “Fracture by Andrés Neuman (transl. Nick Caistor and Lorenza Garcia: ’The art of mending cracks without secrecy’”