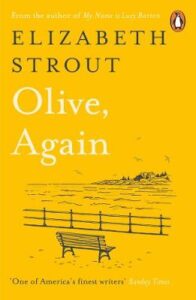 Slim pickings for November’s paperbacks with just five that stand out for me, two of which I’ve already read. I’ll begin with one of my favourite books from last year which saw the return of the irascible yet essentially warm-hearted Olive Kitteridge, familiar to fans of Elizabeth Strout’s eponymous Pulitzer Prize-winning book published in 2008. Olive, Again takes the same form, comprising thirteen closely-knit short stories in which Olive is often the central character, sometimes a co-star and occasionally a bit-player. Ordinary everyday day life is filled with events unremarkable to others but extraordinary to those who live through them. Epiphanies are had. Time passes. Olive grows old but not always alone. It’s a triumph. I’m deeply suspicious of sequels but delighted that Strout took me back to Crosby to meet Olive again. My hope is that Frances Mcdormand, who was such a thoroughly convincing Olive in HBO’s miniseries, is already practicing her lines.

I wasn’t at all sure that I’d get on with Kevin Wilson’s Nothing to See Here which tells the story of a young woman, still reeling from the betrayal by her best friend which wrecked her life, who nevertheless responds to that friend’s call for help. It’s also about two children who burst into flames when agitated. You can see why I might have thought Wilson’s funny, heartrending and wholly original novel might not be for me but it turned out to be an absolute treat. If the prospect of spontaneously combusting children puts you off, I’d ignore it. You soon get used to the idea. 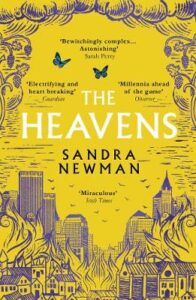 new millennium. Kate wakes up believing she’s a woman called Emilia in a plague-stricken sixteenth-century London. ‘A story of love and alternate universes, madness and time travel, The Heavens is a dream bound up in a strange awakening; it is a bewitching novel of what we have lost, and what we might yet be able to save’ say the publishers. It’s that mention of time travel that makes me waver with this one but so many readers whose opinions I respect raved about it that I’m willing to give it a try. After all, it can’t be wackier than children spontaneously catching fire.

The Crossed-Out Notebook by Nicolás Giacobone who co-wrote the screenplay for Birdman sounds only slightly off the wall in comparison with my previous two choices. An Argentinean screenwriter is imprisoned in a basement by a director determined that his captive will produce a world-changing screenplay. Every evening, the writer crosses out his writing from the previous night. ‘The clash between the two men and their different approaches leads to a movie being made, a gun going off, an unlikely escape, and a final confrontation. In the end, The Crossed-Out Notebook is a darkly funny novel full of intrigue and surprise about the essence of the creative process; a short, crazy ode to any artist whose brilliance shines through strangeness and adversity’ say the publishers which sounds promising to me.

Nana Oforiatta Ayim’s The God Child takes us to Germany where Taiye Selasi Maya grows up aware of her parents’ difference. One Christmas her cousin arrives,

spinning stories about Ghana, colonialism and its fallout, awakening Maya to the reasons why her parents might be the way they are. When, as a young woman, Maya is reunited with her cousin in Ghana, she finds him troubled. ‘Her homecoming will set off an exorcism of their family and country’s strangest, darkest demons. It is in this destruction’s wake that Maya realises her own purpose: to tell the story of her mother, her cousin, their land and their loss, on her own terms, in her own voice’ say the publishers of what they’re calling ‘a brave reinvention of the immigrant narrative’ which sounds right up my alley.

That’s it for the November paperback preview which has a distinctly yellow cover theme running through it. As ever, a click on a title will either take you to my review or to a more detailed synopsis. If you missed the month’s new titles and would like to catch up they’re here and here.

24 thoughts on “Paperbacks to Look Out for in November 2020”