The second part of March’s paperback goodies starts with three books I’ve already read, two of which were favourites from last year, beginning with Eley Williams’ The Liar’s Dictionary in which a young woman, interning for the publisher of an unfinished encyclopaedic dictionary, fields the threatening phone calls made to its office with monotonous regularity. After three years of answering the daily torrent of abuse, Mallory is asked by her boss to track down the dictionary’s ‘mountweazels’- deliberate falsities – prior to digitising it. Meanwhile, in 1899 Peter Winceworth is slyly slipping those falsities into Swansby’s dictionary. Williams’ book was an absolute joy for me, pressing a multitude of my literary buttons. A dual narrative peppered with lots of discursive etymological nuggets, witty and occasionally slapstick, it’s also a glorious piece of storytelling.

It was its title that attracted me to Souvankham Thammavongsa’s How to Pronounce Knife, a collection of stories about immigrants and refugees, cleverly exemplifying the idiosyncratic challenges English throws at those for whom it’s a second language. Born in a refugee camp in Thailand, Laotian writer Thammavongsa is a poet whose own facility for language is demonstrated throughout this fine collection. Characters are hard-pressed, often engaged in work far below their capabilities, struggling to give their sons and daughters what they see others enjoying while their children are both protective and embarrassed by them. Many of the stories are infused with a quiet

sadness sometimes undercut with gentle humour, all are remarkable in their eloquent economy.

I circled around Elizabeth Wetmore’s Valentine for some time last year, expecting a tough read. Wetmore’s debut explores the fallout of a rape through the voices of the women in a West Texas town caught up in the ‘70s oil boom. On Valentine’s Day 1976, fourteen-year-old Gloria is raped by an oil worker, dragging herself to the nearest house the next morning. Mary Rose is angered by what she sees, becoming an outcast in the town for taking the side of the young Mexican girl against her white rapist. Wetmore handles themes of misogyny and racism with subtlety, slipping them into her narrative rather than bludgeoning her readers with them. It’s a gripping, immersive debut, hard to read at times but immensely rewarding.

Moving north from Texas, Jonathan Carr’s debut, Make Me a City, is about the founding of Chicago. Opening in 1800, the novel spans the city’s first century and encompasses a wide range of characters, all with stories to tell. ‘Chicago, its inhabitants and its history are brought to dazzling, colourful life in this epic tale that speaks of not just one city but America as a whole, and of how people come to find their place in the world’ according to the publishers which sounds pleasingly ambitious.

Entirely different, Hannah Persaud’s The Codes of Love. Is about Emily and Ryan, a successful young couple whose marriage is a happy one as long as they stick to the rules. When freewheeling Ada comes along, both Emily and Ryan find themselves drawn to her unbeknownst to each other, apparently, reminding me of Joanna Briscoe’s Sleep with Me and Simone de Beauvoir’s She Came to Stay, both of which I loved.

Set in Japan, Stephanie Scott’s What’s Left of Me is Yours has an intriguing premise: the employment of an agent to seduce a spouse in order to provide grounds for divorce in the employer’s favour. Based on a real case, Scott’s debut tells the story of one such agent who falls in love with his target. She moves in with him after her divorce, unaware of what he’s done. Truth will out, though, as it so often does. Wakaresaseya, as it’s known, is a thriving industry in the Japanese underworld, apparently.

Staying with the relationship theme, Pauline Delabroy-Allards’s debut All About Sarah tells the story of two women who embark on a tumultuous affair – the eponymous Sarah and the woman she meets at a New Year’s Eve party. While Sarah is something of a hellraiser her thirtysomething lover leads a quiet life, working as a teacher while raising her daughter alone. ‘Sarah enters the scene like 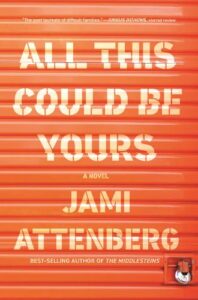 a tornado. A talented young violinist, she is loud, vivacious, appealingly unkempt in a world where everyone seems preoccupied with being ‘just so’. It is the beginning of an intense relationship, tender and violent, that will upend both women’s lives’ say the publishers of a novel which took literary France by storm.

Turbulent relationships also feature in Jami Attenberg’s All This Could Be Yours which sees a daughter determined to unearth the secrets of her difficult father who is dying. Alex grills her mother who thinks about her stormy married life while fending off her daughter’s incessant questions. Alex’s brother has kept himself firmly out of the proceedings while his wife has a meltdown which seems to involve buying huge amounts of lipstick. ‘As each family member grapples with Victor’s history, they must figure out a way to move forward – with one another, for themselves and for the sake of their children’ according to the blurb. Given that it’s by Jami Attenberg, I’m expecting some sharp writing.

I’m rounding off March’s paperback preview with Anakana Schofield’s Bina, recommended to me by another blogger via

social media. I’d love to tell you who but, sadly, I’ve forgotten. Shortlisted for last year’s Goldsmiths Prize, it’s a ‘novel of warnings’ issued on the backs of discarded envelopes by Bina who’s at the end of her tether. A book ‘filled with ‘with humour and sadness, love and rage, and the consolations, obligations and mysteries of lifelong friendship’ according to the publishers which sounds very promising to me.

That’s it for March’s potential treats. A click on a title will take you either to my review or to a more detailed synopsis for any that have snagged your attention. If you missed the month’s new fiction and would like to catch up, it’s here and here, while the first batch of paperbacks is here.