Another great month for paperbacks should you need to top up that TBR pile after reading your way through a long pandemic winter. This first installment includes two from my 2020 books of the year list, beginning with Douglas Stuart’s Booker Prize-winning Shuggie Bain. Stuart’s novel follows the eponymous Shuggie over a decade from the age of five, ceaselessly bullied and devoted to his alcoholic mother. Agnes is a proud beauty, given to angry self-pity once the booze sets in. When his father moves them into the house he’s promised for years then promptly disappears, Agnes is appalled to find herself living in a poverty-stricken neighbourhood. Given that synopsis, you might expect this to be story of unremitting misery but Stuart delivers it with a great deal of sharp, dry wit. It’s a long time since I’ve been so excited by a Booker Prize winner, not least because it was on my wishlist.

I’d also included C Pam Zhang’s striking How Much of These Hills is Gold, set in a reimagined American West in the grips of the Gold Rush. Zhang’s novel is told largely from the perspective of two orphans, travelling through a land almost mythical in its beauty, searching for the perfect burial place for their father’s body. Exploring themes of family, home – or the lack of – and otherness through the stories of a Chinese family, three of whom are American but rarely accepted as such, this starkly beautiful debut is both thought provoking and original.

Much closer to home, Frances Macken’s You Have to Make Your Own Fun Around Here  begins in ’90s rural Ireland where three ten-year-old girls are 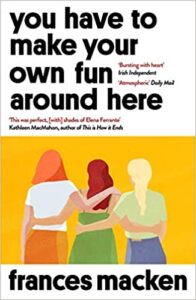 inseparable: Evelyn is the boss with Katie second in command and Maeve trailing behind. When a new girl disappears without trace, a long shadow of suspicion is cast over gossip ridden Glenbruff. Katie finally gets away to art school leaving Evelyn behind but not her pernicious influence. Macken has a sharp ear for dialogue, scattering her novel with smartly funny lines while capturing a desperate longing for bright lights and opportunity through Katie, torn between her idolisation of Evelyn and her need to escape.

Parties and madness are on the agenda in Binnie Kirshenbaum’s Rabbits for Food which begins on New Year’s Eve when writer, Bunny, finally falls to pieces. Once admitted to a classy New York psychiatric hospital, Bunny refuses all meds and instead begins to write a novel about her fellow patients and what’s brought about her own breakdown. ‘Rabbits for Food shows how art can lead us out of-or into-the depths of disconsolate loneliness and piercing grief. A bravura literary performance from one of America’s finest writers’ according to the publishers. I have to admit I hadn’t heard of Kirshenbaum before but this does sound interesting.

I was originally put off Clare Chambers’ Small Pleasures but so many readers I trust have assured me it’s good that I’ve added it to my list. Set in ‘50s suburban London it’s about a middle-aged feature writer whose paper is contacted by a mother claiming her daughter is the result of a virgin birth. As Jean 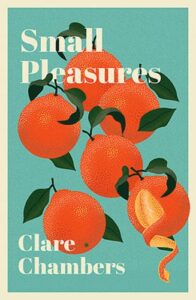 becomes increasingly involved with the Tilbury family, investigating this astonishing assertion, she sees the chance of happiness which will apparently come at a terrible price. Janet over at From First Page to Last loved it so much she’s championing it for NB Magazine which has pretty well convinced me. You can see her pitch here.

Emily St John Mandel’s dystopian Station Eleven was one of those titles impossible to avoid in my neck of the Twitter woods when it was published back in 2014 but I wasn’t a fan so you might wonder why I’m including The Glass Hotel here but I like the sound of both its settings and themes. The wealthy owner of the Hotel Caiette and its bartender begin a relationship on the same day as a hooded figure is seen scrawling a violent message on the hotel’s wall. Thirteen years later the erstwhile bartender disappears from the deck of a ship. ‘Weaving together the lives of these characters, Emily St. John Mandel’s The Glass Hotel moves between the ship, the towers of Manhattan, and the wilderness of remote British Columbia, painting a breathtaking picture of greed and guilt, fantasy and delusion, art and the ghosts of our pasts’ according to the publishers which sounds like an altogether different kind of dystopia.

I began with one prize winner and I’m ending with another although I’m still in two minds about Maggie O’Farrell’s Hamnet despite its Women’s Prize for Fiction victory. As I’m sure most of you are well aware, it’s about 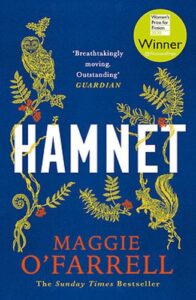 Shakespeare’s son who died aged twelve. Described by the publishers as ‘a tender and unforgettable reimagining of a boy whose life has been all but forgotten, but whose name was given to one of the most celebrated plays ever written’, it’s the story behind Hamlet, apparently. I wish I could be more enthusiastic about reading this one, much admired by Karen at Bookertalk as you’ll see from her review.

That’s it for the first batch of April’s paperback goodies. As ever, a click on a title will either take you to my review or to a more detailed synopsis. If you’d like to catch up with April’s new titles they’re here and here. Part two soon…