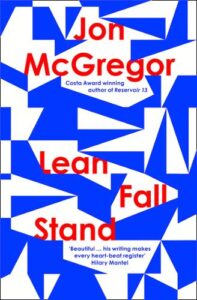 Four years ago, I started my review of Jon McGregor’s Reservoir 13 with a paean of praise for this writer who seems to excel himself with each new book. His superb new novel, Lean Fall Stand, continues that progression with its story of a man returning from his beloved Antarctica, irrevocably changed, and his wife who must find a way to care for him.

All that ice and snow and sea and sky. Glaciers and ridges and icebergs and scree. Weathering and wind-form and shear. The air so clear that distances shrank and all the colours shone

Robert is a technical assistant who’s spent much of the past thirty years in Antarctica, providing backup for scientists. He’s almost at the end of his stint with Luke and Thomas who have been updating the maps he remembers being drawn. He’s an old hand, eager to share his stories; they’re slightly disparaging but fully aware that it’s Robert’s skills that will keep them alive. In the final few days, Thomas decides to record the landscape using the camera his girlfriend gave him. It’s an outing which will end disastrously, something Anna has been expecting for her entire marriage to Robert. Summoned to Santiago, she knows her husband has had a stroke but not the extent of its damage. Theirs is a marriage based on an ‘anomaly’ as she likes to call it, one which accommodates her career and affords her an independence she almost takes for granted. Robert’s return upends all that. Their children can’t seem to grasp what’s happened, bombarding her with unrealistic suggestions, her employers are concerned yet still expect her to meet deadlines. Only Bridget, the widow of Robert’s best friend and colleague, grasps the situation, perhaps more so than Anna, herself. When Robert is persuaded to attend a support group, he’s reluctant but it proves to be the saving of him, and perhaps of Anna, too.

He always had to reach for the words. As though they’d been put on a high shelf in the stores

The title of McGregor’s novel follows the trajectory of Robert’s stroke, from the storm-hit expedition to the rehabilitation which sees him become a very different man from the one who accompanied Thomas and Luke to Station K. While Lean breathlessly captures the disorientation and disorder of both the storm and Robert’s stroke, Fall and Stand are remarkable for their empathetic depiction of its aftermath. Robert’s loss of language is a hard blow – he’s a proud man who likes nothing more than to tell a story, robbed of that pleasure by aphasia and its frustrations. The support group scenes are particularly skilfully drawn, each member’s speech tic different, some profane others almost poetic, depicted with a gentle compassionate humour, a compassion which extends to the portrayal of Anna’s ambivalence about her new role as carer. It ends with what reads almost like a prose poem, a description of what happened to Robert in Antarctica, in quiet contrast to the frantic passage as he struggles for comprehension when the stroke felled him. A quietly powerful book, unafraid to explore the boundaries of language. Surely a shoo-in for a multitude of literary prizes