This second batch of July paperbacks begins with a book I wasn’t at all sure I’d like given that it’s a crime novel but its location and period appealed. Miranda Emmerson’s A Little London Scandal is set in 1967, on the eve of the decriminalisation of homosexuality in England and Wales. When a body is found at the back of a gentleman’s club an investigation is launched by a CID keen for a conviction and not too fussy about evidence. Anna Treadway resumes her role as amateur sleuth when a young man she knows finds himself in the frame, teaming up with DS Hayes in a quest for truth which takes them through all echelons of London’s society, from the establishment to the homeless. One of the things I most enjoyed about this atmospheric novel was its vivid sense of place which took me to a part of London I know well, long before gentrification.

I’m not a fan of Rose Tremain’s writing but Islands of Mercy is set partly in my home town of Bath where in 1865 a young nurse is torn between a passionate affair with a woman and a conventional life married to a doctor. Meanwhile, in Borneo the eccentric Sir Ralph Savage is wrestling with his own passions. ‘Jane’s quest for an altered life and Sir Ralph’s endeavours become locked together as the story journeys across the globe’ according to the blurb. I’m going to have to work

quite hard to summon the enthusiasm for this one.

Ayad Akhtar’s Homeland Elegies is much more appealing with its exploration of US society through the experience of an immigrant father and his American son struggling to find a foothold in Trump’s divided country. Hard to work out much of a story from the book’s blurb but this is the description that caught my eye: ‘Part family drama, part satire, part picaresque, at its heart it is the story of a father and son, and the country they call home. Ranging from the heartland towns of America to palatial suites in Davos to guerrilla lookouts in the mountains of Afghanistan, Akhtar forges a narrative voice that is original as it is exuberantly entertaining’. I like the sound of that and Jennifer Egan rates it very highly, apparently.

Amity Gaige’s Sea Wife sees a couple set off on an adventure some might call foolhardy. Novice sailors Michael, Juliet and their children take to the sea, heading for Panama. At first the adventure breathes new life into the couple’s marriage but soon they’re struggling, particularly Juliet who’s suffering from post-natal depression. ‘Sea Wife is told in gripping dual 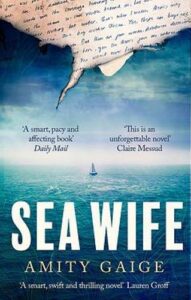 perspectives: Juliet’s first-person narration, after the journey, as she struggles to come to terms with the dire, life-changing events that unfolded at sea; and Michael’s captain’s log – that provides a riveting, slow-motion account of those same inexorable events’ says the blurb. I do love a dual narrative, if done well.

Published in hardback with the title The Last Migration, Charlotte McConnaghy’s Migrations sees a young woman following what may be the last of the Arctic terns on their way to Antarctica. As Franny witnesses the consequences of environmental exploitation her own life begins to unravel. ‘From the west coast of Ireland to Australia and remote Greenland, through crashing Atlantic swells to the bottom of the world, this is an ode to the wild places and creatures now threatened, and an epic story of the possibility of hope against all odds’ say the publishers of a novel much praised by Emily St. John.

I’m ending with Nicole Krauss’ first collection of short stories, To Be a Man, which explores the many and various relationships between men and women, from a woman watching her twelve-year-old daughter, so sure of herself she faces down inappropriate male

attention, to a daughter deeply suspicious when her widowed mother accepts the man Tel Aviv social services present to her as her lost husband. Since the wonderful The History of Love, I’ve read several novels by Krauss but none have quite matched it for me, including the smartly clever Forest Dark but the ten intelligent, thoughtful stories in this collection came close.

That’s it for July’s paperbacks. As ever a click on a title will take you either to my review or to a more detailed synopsis and if you’d like to catch up with the first instalment of paperbacks it’s here. New fiction is here.