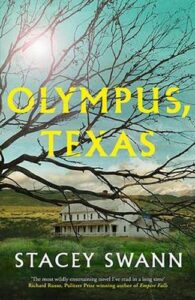 Back from Sussex (more of that next week) with Stacey Swann’s reworking of Classical myth, Olympus, Texas, which came with a persuasively thumping endorsement from Richard Russo. Set in the titular small town, Swann’s debut sees the supremely dysfunctional Briscoes brought face-to-face with some harsh facts when two of its members are caught up in a tragic accident.

She preferred to hang out with her friends at their houses. Living in Olympus felt, to her, like living on a stage. Why would she want to bring anyone behind the curtain, too?

The Briscoes are the kingpins of Olympus where everyone knows everyone else’s business in the manner of small town life. Their son, March, has returned from two years exile in New Mexico after an affair with his brother’s wife. Hap is still furious but Vera is no longer interested in March having used him as a way out of her marriage to the man she’d misjudged, thinking him decent enough to have seen beyond the beauty that defines her for most. Neither brother has much of a role model for marriage in their parents, their mother still consumed with anger about their father’s infidelities – Peter has six children, only three of them June’s. Things look set for a difficult re-entry for March until the family’s focus shifts dramatically to Peter’s twins after a shooting which leaves one man dead and both twins’ lives changed irrevocably. Over the next few days, reckonings will be made, reconciliations tentatively begun, home truths told and a few characters redeemed.

People think that love is good in and of itself. Stupid, really. When does it ever work out like that in real life?

Swann’s novel plays out over a tumultuous week in the lives of the Briscoes, shifting perspectives between characters, helpfully interweaving brief sections explaining the various characters’ fury and grievances, and there’s a great deal of that in this family. Swann handles her myth device lightly. I’m not a classicist but the main characters are easily identifiable and those better educated than me might have fun identifying the rest. It’s all subtly done reminding me of Jane Smiley’s take on King Lear, A Thousand Acres. Swann’s story is replete with satisfying dark secrets, shocking revelations, messy relationships with knobs on, and there are lots of men behaving badly in one way or another. An absorbing novel, a tragicomedy at times, which cleverly emphasises the universality of its themes, it lived up to that glowing Russo puff for me.