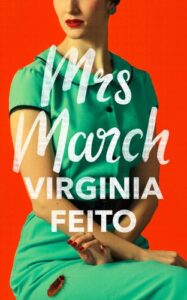 Isn’t that jacket splendid? Strikingly bright with just a hint of something nasty as a cockroach makes its way towards the elegantly attired woman’s manicured hands. Virginia Feito’s Mrs March lives up to that promise, a novel as smartly delivered as its jacket’s design. Married to a successful novelist, Mrs March is beginning to worry about his latest book which seems to be all about her.

She considered storming into every bookstore, buying every copy, destroying them somehow – a huge bonfire lit on a cold December night – but that would be mad, of course

Mrs March is somewhat alarmed when her favourite baker tells her how much the main character of George’s bestselling new novel resembles her. She’s acutely self-conscious, convinced of slights and snide remarks at every turn. She’s not read the book but further investigation leads her to understand that Johanna is a plain, fat whore who no one wants to bed. Despite her fury, Mrs March dutifully arranges the celebration party for George’s success, passing almost unnoticed among her husband’s friends and colleagues, in a welter of embarrassment at the whispers about her she’s sure she overhears. Snooping in George’s study, she spots a newspaper cutting about a young girl who is missing in the small town he and his editor use as their hunting base, a coincidence that seems all to incriminating to Mrs March who jumps to a horrifying conclusion when the girl’s body is found. Beset at every turn by the judgement and gossip of others, or so she thinks, Mrs March begins to unravel in spectacular fashion until the day before George’s birthday party sees a confession.

She undressed, dodging her reflection in the mirror the way one avoids a neighbour in the supermarket

Feito tells her darkly funny story from Mrs March’s perspective, weaving details of her character’s past through the narrative as she becomes increasingly fraught. She’s the child of rich neglectful parents who failed to see the damage done to her, or to care. Her paranoid social awkwardness is excruciating, her ineptitude at even the smallest task painful: without her husband she’s no idea how to be. All this is delivered with a good deal of sly wit but as her imaginings become increasingly febrile and her grip on reality slips further, the tone becomes more sombre. The novel’s press release boldly compares Feito’s writing to Shirley Jackson’s. I’ve not read enough of that to judge but it did remind me of Jill Dawson’s excellent The Crime Writer about Patricia Highsmith, in its depiction of a mind increasingly in disarray. It’s not often I take part in a blogtour but so eager am I to help get the word out about this witty gripping debut that I’ve jumped on board. Below is a list of other enthusiastic bloggers taking part and eager to convince you if I haven’t managed the job.