I’ve been meaning to visit Edinburgh for ages and managed to track down a lovely flat in New Town for the week, complete with a quirky guard at the door. It took us all day to get there and when we arrived, we had the curious feeling of being somewhere at once very different and very familiar. Like my hometown, this part of the city is Georgian but built in a very different stone from our biscuit-coloured variety in Bath.

We’d certainly landed on our feet: New Town is stuffed full of shops selling delicious food, lots of tempting looking restaurants and an excellent Sunday morning market a stone’s throw away in Stockbridge where we greedily stocked up followed by a turn around the lovely Royal Botanic Gardens on the way back to the flat.

Monday’s planned climb up to Arthur’s Seat seemed fairly pointless given the light drizzle veiling what would have been an impressive view of the city so we wandered around the old town instead admiring medieval buildings, some quaint others beautiful. We were rewarded on Tuesday with lovely day, taking ourselves off

to the Hermitage of Braid nature reserve on the edge of town and hiking up to the summit of Blackford Hill for some spectacular panoramic views of the city then walking back through Morningside to New Town, thinking of Miss Jean Brodie. We spent the afternoon properly exploring the glorious Botanic Gardens, one of the finest I’ve visited and I’ve been to quite a few. One of the loveliest pieces of planting was a wildflower meadow still going strong. Scattered through the gardens are some quietly striking sculptures by the likes of Barbara Hepworth and Andy Goldsworthy.

Our last outdoor day was spent strolling along the last section of the Water of Leith walkway which runs through the city to the sea and the attractive tiny port for which it’s named, spotting two Anthony Gormley figures planted in the water along the way. 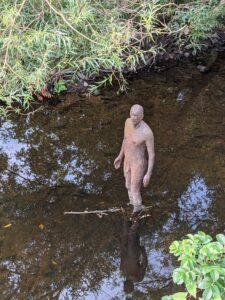 Thanks to Edinburgh’s last blast of summer, most of our gallery-visiting plans were put on hold for a future holiday, and there will certainly be at least one of those. We did fit in a trip to the National Gallery of Modern Art which is split between two buildings. We visited Modern One which houses the permanent collection and has a lovely café in its walled garden. The collection included some Magrittes I’d not seen before, some wonderful Miros and a few Hepworths and Nicholsons reminding me of our visit to Pallant House earlier in the year. It was a great way to round off the holiday. We even got a glimpse of an otter and H spotted a crane of the ornithological variety along the Water of Leith on the way to the gallery.

Edinburgh felt like a properly European city in the way even London doesn’t. I can’t quite put my finger on why. Perhaps it was the celebration of intellectuals – statues of Hume and Smith and streets named after writers – or the wide boulevards of New Town or the dinging of trams. Whatever it was, I’d be happy to live there.

And the books? I finally got around to Taylor Jenkins Reid’s addictive Daisy Jones & the Six, the story of a ’70s rock 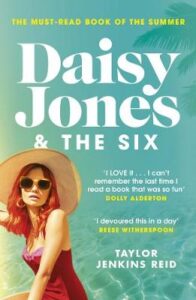 band made up of a patchwork of interviews in which each member has their say. Perfect holiday reading as was Tim Lott’s When We Were Rich, an absorbing, enjoyable state-of-the-nation novel which takes three lifelong friends and their partners from New Year’s Eve 2001 to the 2008 crash.

Such an brilliant holiday, all the more so for the unexpectedly gorgeous weather, and there’s so much more to see. Back to books on Friday but in the meantime I’ll leave you with Martin Creed‘s reassuring, optimistic message, emblazoned across the front of Modern One – Everything is Going to be Alright.

34 thoughts on “Seven Days in Edinburgh and Two Books”