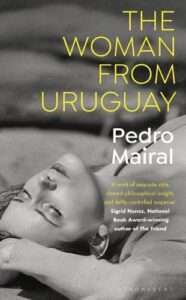 I’m not sure what it was that attracted me to Pedro Mairal’s The Woman from Uruguay. Perhaps it was simply that it’s a novella or that I’ve not read anything by a Latin American writer for some time. Whatever it was I’m glad I decided to read it. This short piece of fiction reads almost like a confessional as a writer looks back over the day he left his Argentinean home for Uruguay, a day that changed his life in entirely unexpected ways.

She asked me about my books. I told her I was going to send her a novel that took place in Brazil, but that first I had to write it

Lucas plans to visit Montevideo for just one day; time enough to withdraw the $15,000 he’s been paid in advances for his next books, visit an old friend and spend time with Guerra, the woman he’s been fantasising about since they met at a literary festival. They’d shared an idyllic day, at least for him, almost but not quite making love on the beach. He and Catalina have been together for some time, caught up in the grind of parenthood and domesticity, living off Catalina’s income. Lucas has no skill other than writing, earning little by that, but plans to exchange his dollars on the Argentinean black market, avoiding tax by smuggling them in from Uruguay. Loot hidden strategically about his person, he waits for Guerra who turns up late with a pit bull in tow, scuppering his plans for an afternoon in a hotel. They enjoy lunch together, get wasted, Lucas’ hopes resurrected after they drop the pit bull off at Guerra’s friends’ apartment but once again they’re interrupted, an interruption that may not have been unexpected by Guerra. A year later, Lucas tells Catalina what really happened that day.

Lucas tells us his own story, from leaving Catalina and their son that morning to his arrival home the worse for wear. He loves both his son and his wife but his memories of Guerra have allowed him to escape the pressures of a life constantly trying to make ends meet, always exhausted and unable to deliver the two novels required of him. Lucas is a fantasist: he thinks he’s in love with Guerra but it’s more the idea of her that beguiles him; he’s sure his scheme will get his family out of financial trouble but he’s naïve in its execution. He’s an engaging narrator, revealing himself to be a more thoughtful man than he first appears, and there’s humour in the delivery of his story with its many digressions, which ends soberly. I enjoyed this novella, full of atmospheric descriptions that summon up its backdrop in clean, elegant prose, expertly translated by Jennifer Croft. Mairal is a writer new to me and I’m hoping that more of his backlist will become available here in the UK.

13 thoughts on “The Woman from Uruguay by Pedro Mairal (transl. Jennifer Croft): One day in the life”