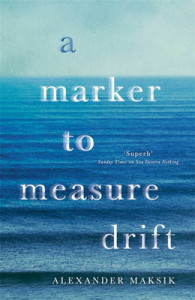 Alexander Maksik’s A Marker to Measure Drift is a novel of such intensity that I had to put it down every so often just to catch my breath and anchor myself in my own comfortable world. Written in lyrical often dreamlike prose, it takes us into the mind of Jacqueline who has fled the rebel uprising in Liberia, first to southern Spain then to a Greek island.

Jacqueline does whatever she must to survive, eking out the small amounts of money she earns by giving foot massages to tourists, reluctantly accepting the casual generosity that occasionally comes her way, sleeping where she can until suspicions are aroused when she must move on again. Each day is a struggle but hunger and deprivation have their own comforts, sparing her from the memories of the vile brutality she has witnessed. Gradually, we learn that Jacqueline is the daughter of Charles Taylor’s finance minister, a man who failed to see the depravity and corruption of his boss until it was too late.

Threaded through her narrative are memories of her school days in Cheltenham, lunches with her father, love making with her journalist lover, laughing with her pregnant sister, all underpinned by the litany of her mother’s chiding commentary on the wisdom or otherwise of the choices she makes. Sometimes Jacqueline breaks, spending days sleeping and nights wracked with nightmares. When, eventually, she reaches the last town on the island she strikes up a friendship with a young waitress whose kindness she comes to trust. She and Katarina share a drink one evening and the truth comes spilling out. The following day, there is no relief. Jacqueline must pick up her burden again and carry on.

No word is wasted in this slim, powerful novel. Maksik skilfully engages his readers’ sympathy so that we ache for a happy ending knowing that there can be none. It’s the kind of book which makes you look at your own petty problems and feel ashamed.

London Made Us by Robert Elms
The Gravity of Love by Sara Stridsberg (transl. Deborah Bragen-Turner)
The Pear Field by Nana Ekvtimishvili (transl. Elizabeth Heighway)

I Will Be Complete by Glen David Gold
The Penguin Book of Japanese Short Stories (ed. Jay Rubin)