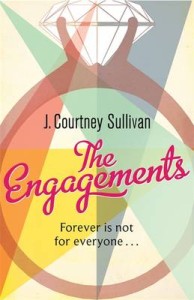 J. Courtney Sullivan writes the kind of long involving books into which you can comfortably sink, surfacing now and again for a cup of tea or whatever you fancy. I thoroughly enjoyed her previous novel, Maine; intelligently written and completely absorbing. The Engagements is structured around the idea of the engagement ring, a ‘tradition’ apparently manufactured via a clever advertising campaign back in the 1940s.

Each of the four main narrative strands explores a character’s relationship with their spouse, married or not, through which the story of Frances Gerety, the copywriter for the De Beers campaign who came up with the immortal phrase ‘A Diamond is Forever’, is threaded. Each is set in a different year: in 1972 Evelyn frets about her son who has left his wife and daughters, remembering her own marriages; James, a paramedic, works the Christmas Eve shift in 1987 worrying about money and whether his wife still loves him; in 2003 Delphine has left her rather dull husband in Paris for a much younger virtuoso violinist in New York and in 2012 Kate is delighted that her gay cousin is marrying his boyfriend but hates the institution of marriage. All four strands are neatly drawn together in the final section of the novel. It’s a clever structure which enables Sullivan to view the enormity of social change over the last sixty or so years through the lens of relationships and our attitudes to marriage,. Deftly handled and utterly engrossing, although the Frances Gerety sections are slightly clunky as if Sullivan couldn’t quite bear to let all that research go to waste.

Talking of intelligent women’s fiction, and non-fiction, the Huffington Post has a little slideshow called Ten Books Every Women Should Read which makes for interesting reading in itself. No sign of The Female Eunuch or The Awakening, and it was something of a surprise to see The Help as their second choice but good to see Caitlin Moran’s How to be a Woman there. Suggestions for must-read books for women gratefully received here – I’d like to add Kamila Shamsie’s brilliant Burnt Shadows whose female protagonist is one of the strongest I’ve come across in contemporary fiction. Much, much better than The Help.

London Made Us by Robert Elms
The Penguin Book of Japanese Short Stories (ed. Jay Rubin)
We Shall Not All Sleep by Estep Nagy