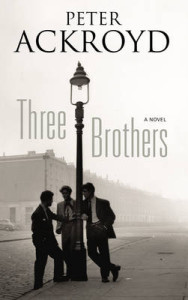 It’s been some time since I’ve read a Peter Ackroyd novel – Hawksmoor was wonderful and I enjoyed Chatterton but somehow I couldn’t get on with his later fiction – however something about Three Brothers appealed so I thought I’d try again. Opening in the 1950s it tells the story of the Hanways who live on council estate in Camden.

Harry, the eldest, street smart and amiable, knows how to get on in life; Daniel, the middle child, is a bright grammar school boy embarrassed by his working class roots while Sam is a misfit, a dreamer who seems to inhabit another world. When their mother disappears, their father offers no explanation leaving the boys to make of it what they will. Harry and Daniel travel far, in ambition if not in distance – Harry to a Fleet Street newspaper editorship, Daniel to a Cambridge academic and literary career – but Sam continues to drift, fetching up as a nightwatchman. Eventually the brothers lose contact with each other yet connection is the key to this novel, binding the characters tightly and echoing through many of their voices. Unbeknownst to  the brothers their lives are closely interwoven in a series of coincidences – Harry uncovers a political scandal concerning a Labour politician and a slum landlord (loosely modelled on the infamous Peter Rachman) whose rents Sam will later collect; Daniel strikes up a relationship at university with a man who will become the politician’s secretary – and on it goes forming an interlocking web of connection between the three of them.

The novel plays out like a grainy black and white film, following its characters down the grimy back streets of Limehouse slums, into the grand house of a newspaper magnate and the parties of the literati – waspishly satirised by Ackroyd – inhabiting much the same territory as Jake Arnott’s The Long Firm with its tale of corruption, blackmail and murder. Ackroyd’s knowledge of London’s history is extraordinary. It’s stitched so tightly through his writing that it’s not only the backdrop but almost a character in itself so vivid is the sense of place. It’s a constant throughout, but at times a little uncomfortably so as in the supernatural overtones of Sam’s convent visions. The novel builds to a slightly strained climax akin to a Greek tragedy as the nefarious goings-on of almost all its characters are revealed. A few reservations then but it’s an engrossing and enjoyable novel for all that.

So, given that I seem to have overcome my disenchantment with Mr Ackroyd which of his novels should I read next?

2 thoughts on “Three Brothers by Peter Ackroyd: Only connect”