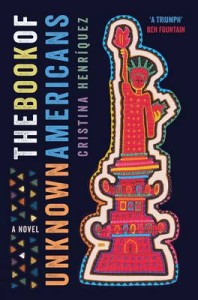 The immigrant experience is a rich theme for fiction, one which offers many of us a glimpse into a world that we will never know and, I would like to think, fosters a level of empathy and tolerance apparently unknown to many tabloid editors with their pernicious headlines. Cristina Henríquez’s brilliantly named The Book of Unknown Americans tells the story of a family who have left their beloved Mexico for the US in the hope of helping their young daughter Maribel, brain-damaged in an accident just a year ago.

Alma and Arturo move into a Delware apartment block tenanted by immigrants from a multitude of countries south of the US border and owned by a man who himself immigrated from Parguay. They’re legal and above board: Arturo found a job picking mushrooms – way beneath his qualifications and capabilities – before they made the journey to the US. They have come so that Maribel can attend the school which both he and Alma hope will help her recover. Life is far from easy but they make friends with their neighbours who have a son around Maribel’s age. Bullied and humiliated at school, Mayor can’t believe his luck when he sees his gorgeous young neighbour. A friendship grows between the two which Mayor hopes may become more than platonic. As Maribel improves Alma relaxes a little but still cannot rid herself of her guilt at her daughter’s accident, or of her fear of the young boy with a skateboard who has his eye on Maribel. All does not go well in a story made more poignant by the knowledge that it was inspired by one told to Henríquez by her father.

Narrated by Mayor and Alma, the novel is punctuated by the testimonies of their fellow tenants some of whom have fled unrest and persecution while others are hoping to escape poverty, seeking a better life for themselves and their children – the same story the world over. Their jobs are often the grubby ones that Americans – for whom anyone with a brown face is Mexican wherever they come from – won’t do. The pay is poor but many have worked hard to make lives for themselves and their families. Homesickness for the familiar, for friends, family and all that’s left behind; the struggles with language and the constant feeling of not belonging run vividly through Alma’s narrative while Mayor’s struggles to fit in and his fellow students’ casual racism give us a glimpse of what life can be like for the second generation immigrant caught between two cultures. It’s a sad story, humanely told, filled with warmth as well as sorrow.

If you’re as fascinated by the immigrant theme as I am you might be interested in Abdulrazak Gurnah’s By the Sea, Jhumpa Lahiri’s The Namesake, Oscar Hijuelos’s Empress of the Splendid Season or Dinawa Mengestu’s Children of the Revolution, all of which I’ve read and enjoyed. I’m sure there must be many more. Let me know if you’ve spotted any gaping holes in my list that you think I should fill.

2 thoughts on “The Book of Unknown Americans by Cristina Henríquez: A sad story filled with warmth as well as sorrow”