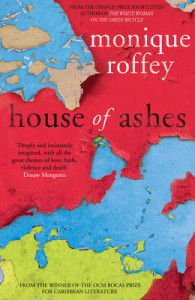 I’ve long been a fan of Monique Roffey’s novels – all of them very different, from the slightly fantastical Sun Dog to Archipelago with its lovely descriptions of the natural world. House of Ashes is no exception – a powerfully political novel which makes some cogent points while maintaining the pace of a page-turner.

Bookish and diffident, Ashes seems an unlikely revolutionary but the brother he idolised was shot dead for fomenting unrest on the corrupt little island of Sans Amen, seemingly unable to shake off the remnants of British colonialism. Their nights as boys spent whispering about their dreams for a New Society have left him uncritical of the Leader and his plans to overthrow the government. One Wednesday, Ashes and his motley band of ‘brothers’ storm the House of Power while the Leader makes for the TV station. Shots are fired, a woman dies inside the chamber but the Prime Minster remains defiant ordering the Army to attack. Soon the hostage-takers are being held hostage while the island’s people run riot, looting whatever comes to hand rather than joining in the revolutionary fervour as the ‘brothers’ had expected. Five days of siege ensue in which both sides of the divide begin to see things differently.

Roffey narrates her novel through the voices of Ashes and Aspasia Garland, one of only two women cabinet members. Ashes is horrified by what he sees – his books of political theory have not prepared him for bloodshed, nor the ineptitude of his comrades. His respect for the politicians who conduct themselves with as much dignity as they can muster changes his view of them. In her turn, Aspasia begins to feel that she has some responsibility for events understanding that poverty, ignorance and anger are at the root of these street boys’ actions, boys who remind her of her son. Her political life has been devoted to leatherback turtles rather than the island’s children failed by successive corrupt governments who have turned a blind eye to burgeoning crime. The novel’s last section takes Breeze, one of those boys who played a significant part in the botched coup, and picks up his life twenty-three years later. Redemption may be possible but at a price.

Written in simple direct language making it all the more powerful, House of Ashes is rooted in the Caribbean – it’s based loosely on the failed 1990 coup in Trinidad and Tobago – but in many ways it could be anywhere in which poverty, lack of education and corruption provide rich pickings for older men with enough charisma to scoop up angry young boys ripe for conversion to any cause which appears to offer them a future. Its theme of power – its use and misuse – is universal and in that respect it makes uncomfortable reading.

7 thoughts on “House of Ashes by Monique Roffey: ‘Power is Love’”