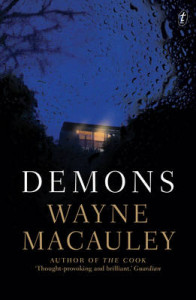 In Boccaccio’s The Decameron ten young people take to the hills to escape the Black Death devastating Florence. To entertain themselves they spin tales, some erotic, some tragic, others funny: a reflection of life as it was lived then. It’s an attractive structure: Jane Smiley used it in Ten Days in the Hills as did Julia Voznesenskaya in The Women’s Decameron, both critiques of the two societies in which they’re set. Wayne Macauley has picked it up for his new novel set in an isolated house on Australia’s Great Ocean Road to which seven well-heeled, middle-aged friends have taken themselves to tell stories.

Lauren kicks off with her tale of middle-aged marital discontent and adultery, then Hannah takes up the baton with her story of a young girl seemingly allergic to the modern world. Evan can’t restrain himself, although it’s time for bed, telling Adam about his daughter’s relationship with a border official his own age. The next day, with a storm raging outside, Leon relates meeting an old university friend who plunges back into radical street politics, disenchanted with his comfortable life; Marshall tells the story of a political colleague caught up in a case of Aboriginal squatting; Megan comes up with a novel solution to hospital waiting lists told to her by a nurse and Adam’s offering is a tale of city folk whose dreams of a rural idyll have to be fulfilled at any price. Meanwhile, Marshall’s teenage daughter lurks discontentedly in the background, apparently distraught at her uncle’s suicide. A game of Truth or Dare rounds off the storytelling throwing much of what’s gone before into question.

Through the seven friends’ tales, Demons holds a mirror up to Australian society and its reflection is unflattering to say the least, although lest we get too smug much of it’s familiar from our own society in the UK – hospital waiting lists, property prices and the obsession they engender, instant gratification, etc. etc. Macauley’s novel is entertaining and his characterisation strong but there’s not much to be cheerful about here. I know that many of us are a little too forgetful of our privileged lives in the developed world and need a little reminding of it but I yearned for some brightness to shine through the gloom. That said, it’s a novel that leaves a strong impression – I’ll be chewing it over for some time. And if anyone knows of any other variations on The Decameron, I’d love to hear about them.

6 thoughts on “Demons by Wayne Macauley: Truth and lies”