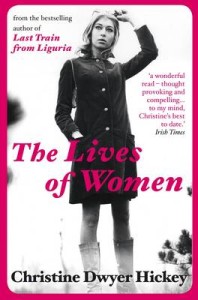 Another very tasty batch of paperback treats to keep  the dreary British winter at bay, kicking off with a writer who seems very underrated to me. Christine Dwyer Hickey’s The Lives of Women tells the story of Elaine who has come back to Ireland where her widowed father is wheelchair-bound after surgery. She’s lived in New York since she was sixteen but this is only her second visit home. Hickey slowly unfolds the tale of what lies behind Elaine’s long absence as she looks back to the 1970s and the tragedy that overshadowed her last Irish summer. Dwyer’s writing is quite beautiful – spare yet lyrical. If you haven’t yet read anything by her I hope you’ll give this one a try.

Claire Fuller’s Our Endless Numbered Days tells the story of another woman looking back to a summer in the ‘70s but is entirely different. Peggy is the daughter of a German concert pianist and an English man. Ute is about to go on tour for the first time in many years while James and his North London Retreater friends play at being survivalists. After a murderous row with one of them, James tells Peggy that they are off on holiday to ‘die Hütte’ where Ute will meet them later. After a summer of repairing the derelict hut James delivers some devastating news: the rest of the world has been destroyed. It’s a wonderfully inventive, very powerful novel. I gather that Fuller has a new one in the works, to be published late 2016/early 2017. A treat to look forward to.

Judith Claire Mitchell’s A Reunion of Ghosts is another tale of a supremely dysfunctional family written in the form of a memoir which is to be the suicide note of the remaining Alters. Lady, Vee and Delph have grown up imbued with the knowledge of the family curse. Their great-grandfather Lenz first synthesised chlorine gas, used in the First World War. Both he and his wife Iris committed suicide, as did their son Richard unable to live with the misery of guilt by association. The third generation continued the family tradition. Now it’s the turn of the fourth then something entirely unexpected happens. Not to everyone’s taste, I suspect, but I thoroughly enjoyed this funny, irreverent novel.

I’m looking forward to Andrew O’Hagan’s The Illuminations set several years on from 2001. Anne, once a documentary photographer, meets her beloved grandson, a captain with the Royal Western Fusiliers and fresh from a tour of duty in Afghanistan. Both have secrets which begin to emerge, taking them on a journey back to the old Blackpool guesthouse where Anne once had a room. I haven’t read an O’Hagan for some time but this one sounds interesting.

I’m not at all sure about this last choice: T. Geronimo Johnson’s Welcome to Braggsville. The Washington Post called it ‘The most dazzling, most unsettling, most oh-my-God-listen-up novel you’ll read this year’ but it’s a book which I suspect will resonate much more with American readers than with British. When D’aron Davenport inadvertently reveals that his small Southern town plays host to a Civil War Reenactment every year, his liberal fellow students see red and descend on Braggsville to stage a dramatic protest. ‘A literary coming-of-age novel for a new generation, written with keen wit, tremendous social insight and a unique, generous heart, Welcome to Braggsville reminds us of the promise and perils of youthful exuberance, while painting an indelible portrait of contemporary America.’ say the publishers. Certainly worth investigating.

Quite an embarrassment of riches for January, in all. As ever, if you’d like more detail a click on the first three will take you to my review and to Waterstones website for the second two. If you’d like to catch up with the first batch of paperbacks they’re here, and  the hardbacks are here and here.

That’s it from me for a week or so. A very happy Christmas to you all. I hope it will bring you a least something that you’d like, be it a book, time with family and friends or perhaps a little to yourself.