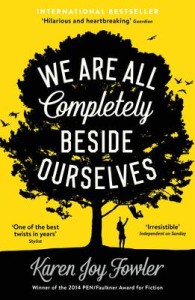 I seem to be adding one each month to my books read (but not reviewed) tally after March’s miserable single score. May saw three excellent novels added to the list, each very different from the other, starting with one that I wrote a post about well over a year ago, prompted by a friend’s experience of reading a review which revealed her current read’s dramatic twist, much talked about at the time on social media, albeit obliquely. The book was Karen Joy Fowler’s We Are All Completely Beside Ourselves and I now realise how difficult it is to write about and not refer to that all important, much vaunted twist. If you’ve read it you’ll know what I’m talking about. So, all I’m going to say is that it’s told from the point of view of a woman whose brother and sister are both missing. She and her sister were particularly close – almost the same age but entirely different. The disappearance of her brother is linked to that of her sister. It’s both funny and heartrending but to do it proper justice I’d need to spill the beans which I’m determined not to do. All of which just goes to show that it’s very easy to sound off about things when you’re not in full possession of the facts.

I’d read and enjoyed both of Janice Galloway’s memoirs – This is Not About Me and All Made Up – but had not got around to any of her fiction until last month. Her first novel, The Trick is to Keep Breathing, was reissued under the excellent Vintage Classics imprint last year. They’re the publishers responsible for rediscovering both John Williams’ Stoner and Thomas Savage’s The Power of the Dog: they know their onions. Written from the point of view of a woman suffering a profound breakdown, Galloway’s increasingly fractured narrative reflects Joy’s unravelling as, failed repeatedly by her psychiatrists, she buckles under the weight of grief at the sudden death of her lover. It’s a harrowing, visceral read – utterly convincing. 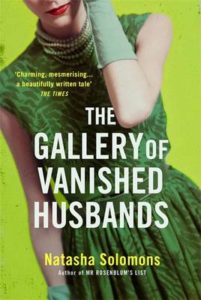 Natasha Solomons’ The Gallery Of Vanished Husbands is a much more cheerful affair. Juliet sets off one day in possession of enough money to buy a fridge but finds herself wandering down her favourite street, the Bayswater Road, its pavements populated with artists. Throwing caution to the winds she commissions a portrait from Charlie Fussell, beginning a relationship which will eventually see her as a doyenne of the art world. Solomons’ novel takes her protagonist from the uncomfortable position of  an aguna – a Jewish woman deserted by her husband and considered to be neither a widow or a wife – into a very different world. It’s a thoroughly enjoyable and satisfying journey. Great jacket too!