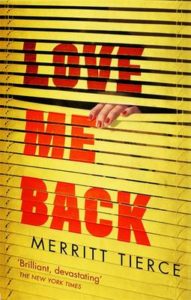 Several jewels to look out for in August’s paperback crown, starting with one of the best books I’ve read this year: Merritt Tierce’s debut Love Me Back. It’s the story of Marie who makes her living waiting tables at a classy Dallas steakhouse. Coolly collected, beautifully turned out in her starched bistro apron and meticulously pressed shirt, Marie is the reliable one, always stepping in to fill a shift vacancy but careful to dodge any chance of promotion so that she can spend weekends with her daughter. Beneath her apparently calm exterior she struggles to keep herself together, unable to resist the welcome numbing of drugs, self-harm and the kind of sex that leaves her empty. That may not sound the stuff of literary excellence but believe me that’s what Tierce fashions it into. Altogether a startlingly accomplished debut – compulsively addictive. I’m looking forward to seeing what she comes up with next.

Lucia Berlin would have been all too familiar with the seamier side of work, fitting her stories around a multitude of jobs from teaching English to cleaning houses. She died in 2004 having written intermittently over a long period stretching back to the ‘60s. A Manual for Cleaning Women, a collection of her stories which draw heavily on her own life, was published last year to enormous and well deserved acclaim. There’s a striking immediacy in her short, crisp, carefully constructed sentences – from the graphic, panicky tooth extraction of ‘Doctor H. A. Moynihan’ to the gentleness of drunks recognising desperation in ‘Unmanageable’. Her material is often raw but there’s always a wry humour in her delivery. Without wanting to be a proselytising zealot, I’ll just say that this collection played a large part in converting me to the pleasure of reading short stories.

Written in a lighthearted, mischievous style Grégoire Delacourt’s The First Thing You See is

entirely different but succeeds in delivering quite a punch. When he hears a knock at his door, twenty-year-old Arthur Drefuss hauls himself off the sofa – mid-Sopranos – only to find Scarlett Johansson on his doorstep. Granted she looks a little bedraggled but she’s as stunningly beautiful both in face and figure as she is on-screen. Of course it’s nor Ms Johansson who, it turns out, didn’t like the idea of this book at all, managing to delay its publication for quite some time. Delacourt avoids the maudlin, keeping his tone light and witty apart from rare moments of sadness in this fable-like novel which puts our adulation of physical beauty, celebrity and the nature of desire in an unflattering spotlight. It’s a little gem.

I’ve yet to get my hands on the following four starting with Jenni Fagan’s The Sunlight Pilgrims. Anais, the main protagonist of Fagan’s debut, The Panopticon, was one of those characters who stayed with me for quite some time: bright, sassy and fierce – she was extraordinarily vividly drawn. I’m hoping for something similar with this one which seems to be set in the near future on a Scottish caravan park. It tells the story of a small community who are beginning to think that the freak weather spells the end of the world. Strange things are happening, the economy has collapsed and public services are in the hands of volunteers. I’m not a fan of dystopian fiction but Fagan’s writing is so striking that I’ll be making an exception for this one.

I tend not to be a fan of historical novels, either, but Naomi J. Williams’ debut Landfalls has a very attractive structure. Set on board two ships which set sail from France in 1785 on a voyage of scientific and geographical discovery returning four years later, it’s told from the perspective of different characters, all of whom have their own agenda, taking its readers from a remote Alaskan bay, where tragedy hits, to St Petersburg. It all sounds very ambitious but if it comes off I think this could be a very absorbing novel. 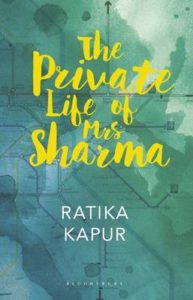 My last August choice is here thanks to Naomi’s description of it as ‘as close to perfect as it gets’ over at The Writes of Women. In Ratika Kapur’s The Private Life of Mrs Sharma, Renuka keeps the household afloat while her husband works in Dubai. All seems on track for her aspirations to the New Indian Dream until she finds herself chatting to a stranger, wondering if it might not be time to shrug off the calls of duty a little. The publishers describe it as ‘a sharp-eyed examination of the clashing of tradition and modernity, from a dramatic new voice in Indian fiction’ but you might like to take a look at Naomi’s review.

That’s it for August. A click on a title will take you to my reviews for the first three, to Waterstones website for a fuller synopsis for the next two and to The Writes of Women for Naomi’s review of the last one. And if you want to catch up with August’s hardback delights they’re here and here.