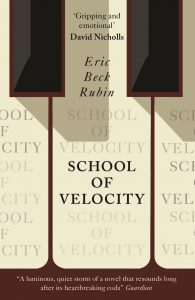 Eric Beck Rubin’s debut is named after Carl Czerny’s eponymous score, much used by pianists to develop their technical skill so the internet tells me. I wish I could say that piece of knowledge popped into my memory while reading Rubin’s novel but I have to admit to being a musical ignoramus. It does give you an indication, however, just how steeped in music this book is. As with all the best titles, this one comes to have more than one meaning by the time you’ve reached the end of this neatly crafted novella about love, friendship and the consequences of repression.

Jan is new to the Sint Ansfried arts school. A talented pianist, his time is entirely taken up with practising although he has managed to find himself a girlfriend. Much to his surprise he snags the attention of the exuberant Dirk, a TV child star given to partying, offering advice on girls and endless joshing humour. Before long, these two have struck up an unlikely friendship which becomes increasingly exclusive. Jan begins to stay over with Dirk, their nights spent in the same bed never spoken of by either of them. After leaving school Dirk decides to continue his studies in the States while Jan becomes the star of his conservatory year. Both look set for glittering careers but curiously neither has contacted the other since leaving Sint Ansfried. During his time in Maastricht, Jan falls in love with Lena, eager to support him in his career. Just before his first tour, Jan meets Dirk and introduces him to Lena. This will be the last time these two meet for decades during which Jan becomes tortured by auditory hallucinations. When he learns that all he’d gleaned of Dirk’s career turns out to be carefully fostered rumour, he engineers a meeting in the hope that confronting their past will silence the cacophony in his head.

Rubin tells his story from Jan’s perspective, vividly evoking his early friendship with Dirk and his increasing distress at the discordance which later bedevils him. This is a wrenching story of love and its repression, laid out for us in the first few pages when Jan thinks ‘In my imagination I can’t separate what I fear from what I secretly want’. Neither of these two seems to have been able to be their true selves. While others have understood the nature of his friendship with Dirk better than he did himself, it seems that Jan has blinded himself just as he did, urged on by Dirk, on their reckless bike rides as boys. Beck’s writing is both insightful and striking, his descriptions of Jan’s torturous hallucinations and his inability to understand their significance painfully vivid. It’s a quietly powerful piece of fiction about knowing and accepting yourself, and the trouble that will come from choosing not to do so.

13 thoughts on “School of Velocity by Eric Beck Rubin: Friendship and discord”