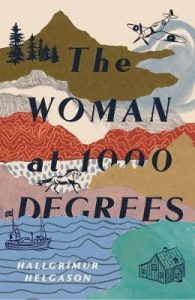 February’s shaping up quite nicely with lots of new titles and paperbacks to ease us through those dark, dank days and long nights here in the Northern Hemisphere. I’ll begin with Hallgrímur Helgason’s The Woman at 1000 Degrees whose eighty-year-old narrator lives alone in a garage, laptop and hand grenade at the ready. Herra recounts her adventurous life in a voice ‘by turns darkly funny, bawdy, poignant, and always, always smart’ taking us from ‘war-torn Europe, then to Argentina and finally to post-crash Iceland where the last pieces of this haunting puzzle fall into place’ according to the publishers, putting me in mind of the excellent Himmler’s Cook.

We’re sticking with an Icelandic author although not the country for Hotel Silence by Auđur Ava Ólafsdóttir whose wonderfully eccentric Butterflies in November was a treat for me. Divorced, lonely and despairing, Jonas takes himself off on holiday not caring where he goes and with no thought of return. He fetches up at the dilapidated Hotel Silence in the middle of a war-torn country. As he learns more about his hosts and the horrors they’ve endured, his own troubles begin to dwindle into insignificance and he pitches in to help. Very much looking forward to this one.

Jillian Medoff’s This Could Hurt is set in an American HR department which may not sound the most riveting of backdrops but those of us who’ve done (or are still doing) time in offices know that they’re fertile ground for quiet drama. Five colleagues are hoping their small company will weather the economic storm, led by a steely head of the department. ‘Compelling, flawed, and heartbreakingly human, these men and women scheme, fall in and out of love, and nurture dreams big and small. As their individual circumstances shift, one thing remains constant – Rosa, the sun around whom they all orbit’ say the publishers going on to describe it as ‘achingly funny’ which makes it sound very attractive.

My next choice takes us to Paris where C. K. Stead’s The Necessary Angel sees a New Zealand academic involved in a complicated love life which encompasses his estranged French wife, his younger colleague and a troubled young English student. A missing Cézanne throws a further spanner into the works. ‘As much an ode to the power of literature as a nuanced exploration of love, fidelity and the balance of power within relationships’ say the publishers. I like the sound of that.

I’m ending this first batch of new titles, still in Paris, with one I’m not entirely sure about: Alicia Drake’s I Love You Too Much. Largely ignored by the adults around him, thirteen-year-old Paul watches from the fringes of his mother, her lover and his father’s lives. Before long he’s seen something he shouldn’t but finds unlikely consolation in Scarlett, a rebellious classmate. ‘I Love You Too Much is a novel of extraordinary intelligence and heart, a devastating coming-of-age story told from the sidelines of Parisian perfection’ say the publishers. It’s the potential for cliché that niggles me here but we’ll see.

That’s it for now. A click on a title will take you to a more detailed synopsis should you be interested. There’ll be another selection of February treats shortly.