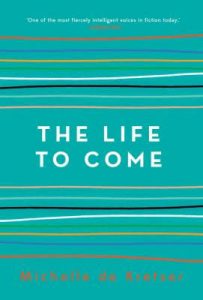 Last year’s reading got off to a very satisfying start with a book by an Australian author – Jennifer Down’s compassionate, clear-sighted and lovely debut, Our Magic Hour. Coincidentally, this year’s has also begun with a beautifully crafted, thoroughly engaging Australian novel. I’d read and enjoyed Michelle de Kretser’s Questions of Travel a few years ago but The Life to Come feels like a much more ambitious novel to me, managing to be both funny and poignant as it examines the state of modern Australia through the stories of a disparate set of characters linked by their relationship to one woman.

The novel opens in the 1990s with George, an aspiring novelist, taking over a house left empty by an elderly cousin. When he bumps into an old student from his tutoring days in need of somewhere to live, he offers her a room. Pippa espouses all the right ideas but seems incapable of living by them, constantly spouting earnest platitudes. When she declares an ambition to become a novelist, George can barely conceal his sneer. Several years later, Cassie unburdens herself to Pippa over coffee. Cassie has fallen in love with Ash – half-Scottish, half Sri Lankan – but it’s clear that she wants a very different relationship from the one he’s prepared to offer. Pippa seems too caught up in her own annoyance at finding only one copy of her novel in a bookshop to offer much consolation. Soon she will be in Paris, awarded a residency to work on her next novel, where she becomes friends with Céleste who grew up in Australia and now works as a translator when not yearning after her married lover, Sabine. Céleste finds herself unexpectedly missing Pippa when she goes home, despite worrying that she might make an appearance as one of Pippa’s characters. Pippa’s novels continue to be relentlessly autobiographical, her husband’s imagined affair and its consequences offering material for the next one. In the book’s final section, Pippa befriends her elderly Sri Lankan neighbour, inviting her to tea with every appearance of solicitude beneath which lurks an ulterior motive. The novel ends with a literary festival which hosts both Pippa and George.

Pippa is the glue that holds the novel’s episodic structure together. Through the stories of Pippa’s friends and acquaintances, de Kretser deftly explores modern life with a deceptively light touch and a hefty dollop of dry, often waspish humour. Barbs are tossed at a multitude of modern obsessions, from social media – which often felt like reading my own Twitter timeline – to faddish food. Frantic virtue signalling in the shape of Eva who never misses the chance to parade her support for ethnic diversity is neatly counterbalanced by the casual racism that her husband demonstrates, a theme which runs through the novel. The literary festival scenes towards the end are particularly amusing, and perhaps heartfelt. Throughout it all, de Kretser’s penetrating observation and mordant humour is underpinned with compassion, most movingly so in the final section which explores the loneliness of old age. This is a fine novel: perceptive and intelligent, sharp yet humane. I’ll be astonished if it’s not on my books of the year list next December.

12 thoughts on “The Life to Come by Michelle de Kretser: The way we live now”