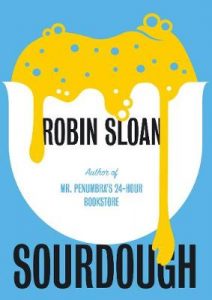 Robin Sloan’s Mr Penumbra’s 24-Hour Bookstore was a 2013 favourite for me. I’ve been waiting patiently for something else from him having been a little disappointed by Mr Penumbra’s prequel, Ajax Penumbra 1969, and was delighted to spot Sourdough on the January horizon. It’s the story of a young woman who is given a sourdough starter, so hungry it may take over the world.

Just a year out of college, Lois lands a plum job in San Francisco helping to design the perfect robotic arm but it’s far from the dream she envisaged. Her nose firmly to the grindstone, her stomach cramped with stress, she exists on a diet of Slurry, the convenient nutritive gel championed by her boss. One day she finds a flyer advertising spicy soup and bread stuck to her apartment door. Desperate for comfort, she places her order with a friendly young man and another delivers it. Soon she’s addicted to their lip-smacking produce but Beo and Chaiman are moving back to their parents in Edinburgh. Before they go, Beo gives Lois his sourdough starter with instructions to play it the background music she’s familiar with from her nightly orders, and an email address. Lois, of course, has no clue how to bake bread but she knows how to set about learning. Soon she discovers there’s more to life than robotics, setting up a small sideline selling bread to General Dexterity’s trophy chef who suggests she auditions for a coveted stall at a farmers market. There she meets a young woman who offers her a place at a market no one else seems to have heard of where all manner of weird and wonderful food is being developed.

Sourdough is just the thing to brighten up a dull winter evening. Lois is an engaging narrator, determined to find a way to make her new hobby pay enough to liberate herself from the grind of her day job, and there’s the promise of a tentative love story threaded through Beo’s emails. A few well-aimed swipes are taken at the modern world which seems either to have lost its taste buds or to have become obsessed with them and is unable to find a middle way. And who can resist a novel whose star is a megalomaniac sourdough starter that puts on a light show, sings to itself and is kept in check by Grateful Dead tracks. A thoroughly enjoyable piece of entertainment which, like Mr Penumbra’s 24-Hour Bookstore, has something to say about the way we live – and eat – now.

26 thoughts on “Sourdough by Robin Sloan: A tasty bit of fun”