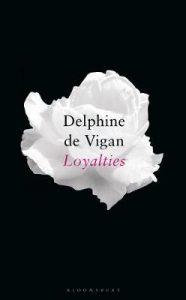 I read Delphine de Vigan’s Based on a True Story around this time last year and knew it would be one of my books of the year. I was delighted, then, when I spotted Loyalties on the publishing horizon. It tells the story of a young boy, caught up in the fallout from a bitter divorce, and explores the ties of silence that bind society together in a sometimes mistaken loyalty.

Hélène is a teacher with her eye on Théo. He’s too quiet for a twelve-year-old boy, seems exhausted much of the time and has only one friend. She’s convinced he’s being abused, just as she was as a child when she was subjected to systematic beatings by her sadistic father. She begins an investigation, first through official channels then stepping over the line. Théo spends alternate weeks with his mother and father. His mother is consumed with an entrenched hatred while his father slides into a deep depression. Théo has found an escape, drinking with his friend Mathis in the hope of obliterating his pain and anxiety. Meanwhile Mathis’ mother, Cécile, has discovered that her husband has an online identity that fills her with horror. In this brief novella, de Vigan examines how children can lose their way when the adults around them have lost theirs.

De Vigan tells her story from the perspectives of her four main characters giving a first-person immediacy to both Hélène and Cécile, one caught up in her own history the other reeling back from the discovery of her husband’s vile opinions. Silence and compromise are the themes here: Cécile has allowed herself to be remodeled into the person her husband wants her to be; Mathis can’t reveal Théo’s father’s condition because it will humiliate his friend and Hélène’s mother failed to step in to prevent her beatings. Théo’s situation is heart-wrenching, caught between two adults, more parent than child to one of them. De Vigan’s writing is as pinpoint sharp as ever but my expectations were sky-high after Based on a True Story which was breathtakingly good, not a description I use very often smacking as it does of hyperbole. Unfair to make that comparison given how very different in style and subject the two novels are, but inevitable, I’m afraid.