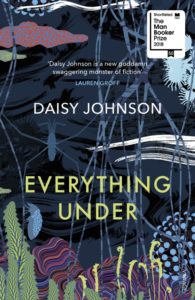 All the books in this second paperback instalment are new to me although, thanks to its Man Booker Prize shortlisting, I’ve heard a lot about Daisy Johnson’s Everything Under. Gretel hasn’t seen her mother for sixteen years when they lived on the canals together speaking the secret language they’d invented. A phone call reunites them bringing back memories of the strange boy who shared their boat for a winter and the fabled underwater creature swimming ever closer. ‘In the end there will be nothing for Gretel to do but to wade deeper into their past, where family secrets and aged prophesies will all come tragically alive again’ according to the blurb.

Christine Mangan’s Tangerine sounds entirely different. Alice is in Tangier with her new husband when she runs into Lucy, once her best friend and roommate, to whom she hasn’t spoken since a dreadful accident. Lucy helps Alice explore this new country in which she feels at sea but soon it seems Lucy has taken her over, and then Alice’s husband goes missing. ‘Tangerine is an extraordinary debut, so tightly wound, so evocative of 1950s Tangier, and so cleverly plotted that it will leave you absolutely breathless’ say the publishers setting the bar a tad high. That 1950s Moroccan setting is the lure for me.

Janice Pariat’s The Nine-Chambered-Heart sounds like a collection of linked short stories but is billed as a novel. Nine characters tell the story of one woman’s life from their own points of view, ranging from her art teacher to the female student who comes to love her. That’s a catnip structure for me but what seals the deal is the blurb’s description of ‘gem-like chapters’ in ‘deeply intimate, luminous and fine-boned novel that explores the nature of intimacy and how each connection you make forms who you are’.

Property is billed as Lionel Shriver’s first short story collection linked, as you might expect from its title, by the theme of what we own, be it real estate or mere stuff. ‘A woman creates a deeply personal wedding present for her best friend; a thirty-something son refuses to leave home; a middle-aged man subjugated by service to his elderly father discovers that the last place you should finally assert yourself is airport security’ say the publishers giving us a flavor of what to expect. I’ve gone off the boil somewhat with Shriver’s novels which seem to become ever more lengthy, but her short stories may well be worth a try.

Lucy Wood’s lovely first novel, Weathering, was a 2015 favourite for me and last year I finally got around to her short story collection Diving Belles and Other Stories which has me eagerly anticipating her new one, The Sing of the Shore. ‘These astonishing, beguiling stories of ghosts and shifting sands, of static caravans and shipwrecked cargo, explore notions of landscape and belonging, permanence and impermanence, and the way places can take hold and never quite let go’ according to the publishers. Weathering was striking for its gorgeous, lyrical writing as was Diving Belles and Other Stories raising expectations for more of the same.

That’s it for February. A click on any title that snags your interest will take you to a more detailed synopsis. If you’d like to catch up with the first instalment of February paperbacks they’re here, new titles are here and here.

28 thoughts on “Paperbacks to Look Out for in February 2019: Part Two”