I’m sure there’s going to be more than one of these posts, particularly  given Madame Bibliophile Recommends’ novella a day back in May 2018 , then this year’s selection lengthened my tbr list. The first task is to define a

novella, something which varies from reader to reader, but for the purposes of this post I’m setting the limit at 200 pages which some may think is strict, others over-generous. Here, then, are the first five of my favourite novellas, all with links to a review on this blog.

I’ve sung the praises of Kent Haruf many times here. His writing exemplifies the stripped down yet beautiful style I most admire. Plainsong is the book I often mention when talking about him but for this post I’ve chosen his last novel, Our Souls at Night, a tender meditation on ageing and the joy it can sometimes bring along with sorrow.  Widowed and in their seventies, Louis and Addie have lived on the same block for years although they barely know each other. One day, tired of long, lonely nights, Addie knocks on Louis’ door and puts a proposition to him: she wants him to spend his nights in her bed. As Addie and Louis tell their stories, holding hands in the dark, we learn that neither of their lives has been quite what they’d hoped or expected them to be. Sweetly melancholy, this is one of the loveliest books I’ve read. If you haven’t yet come across Haruf, I hope I’ve persuaded you to get yourself to a bookshop and seek out his work pronto.

Mary Costello’s Academy Street is a fine example of the kind of Irish writing for which I have a weakness: elegant, understated and suffused with a quiet melancholy. Spanning almost sixty years, Costello’s debut begins, and ends, with a funeral. Left motherless at seven, Tess is a bright girl whose brush with sickness cuts short her education She longs to leave the family farm, training as a nurse then following her sister to America where she settles in New York City. Always a little outside of things, her life is an attenuated one, marked by a deep yearning for an affinity. Costello’s careful prose matches her subject perfectly; Tess’s sudden bright 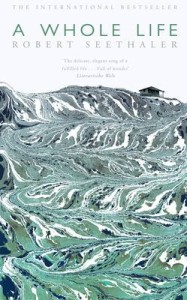 moments of empathy and understanding shine out from it like a beacon.

Towards the end of Academy Street Tess says ‘I could fit my whole life on one page’. The same could be said of Andreas Egger, the subject of Robert Seethaler’s A Whole Life (expertly translated by Charlotte Collins), who leaves his Austrian alpine home just once to go to war in Russia. Egger is painted as a simple soul – he’s stolidly practical, feels adrift even a few miles away from his Austrian valley and finds women impossible to fathom – yet he is a great romantic. Seethaler’s style is wonderfully clipped and matter of fact, punctuated by the occasional philosophical reflection or lyrical descriptive passage. The tumult of change which swept through so many Alpine regions in the twentieth century, marking the pristine landscape with gondolas and ski lifts but bringing prosperity, is strikingly captured through Egger’s eyes and experience.

Like Eggers, the protagonist of Luis Carrasco’s fable-like El Hacho has spent much of his life in one place and is determined to stay there. Curro was born and raised on the Spanish olive farm his father and his father’s father cultivated for years. He lives in the old family home with his wife, farming the land alongside his brother but this year the south is in the grip of an autumnal drought. Jean-Marie is determined to escape their arduous life leading Curro to make an arrangement that will cost him dear. Written in simple, clean prose from which vividly evocative descriptions sing out, this is a remarkable debut, strikingly poetic at times yet stripped of ornament and all the better for it.

At first glance, I took Takashi Hiraide’s The Guest Cat (translated by Eric Selland) to be one of those books lit on by shoppers at Christmas who can’t think what to get their feline-loving friends but it turned out to be a thoughtful, rather lovely piece of fiction. It’s narrated by a man who lives with his wife in the grounds of a large house. In their mid-thirties and childless, they both work at home, leading a quiet life, occasionally seeing friends and helping their landlady. Shy and a little skittish at first, their neighbour’s cat begins to visit them. The couple welcome her, making a little bed for her, and play with her, mindful of her need for privacy, but when their landlady tells them that she plans to sell the house, they know they must move. The beauty of this book is its elegant understatement punctuated by insights into the narrator’s life expressed in prose which is often very beautiful and a little melancholic.

Any novellas you’d like to recommend? Please feel free to quibble with my definition.