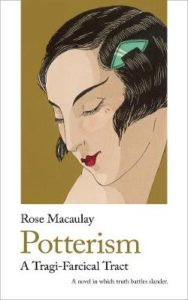 Earlier in the year I reviewed Business as Usual, published by Handheld Press based just a few miles from where I live. It was a little outside my usual reading territory – Handheld specialise in reissuing largely forgotten books by women – but I loved it: a welcome piece of escapism during the height of the pandemic. First published in 1920, Rose Macaulay’s sharp satire on British journalism is the opposite, making it abundantly obvious that our current lamentable newspaper coverage – with honourable exceptions – has very deep roots indeed.

I do hope, Percy, that after this war we English will never again forget that we hate all foreigners

Twins Johnny and Jane Potter are the children of the hugely popular romantic novelist Leila Yorke and her newspaper magnate husband Percy Potter. Neither are particularly distinguished but they graduate with firsts from Oxford, joining the Anti-Potter League set up by their friends to oppose the sensationalism, ignorance and greed exemplified by their father’s newspapers. Both twins are set on a career in writing, angling for work at Gideon’s anti-Potterite Weekly Fact paper which fights a losing battle to uphold the truth. When Percy takes on a handsome new editor, first his eldest daughter, all femininity and sentimentalism, falls for him, then Jane sets her sights on him, more for the opportunity his position offers than passion it seems. Then things take a terrible turn with a violent death. Was it an accident, or was it murder, and if so who did it? Bread and butter stuff for the Potter papers but this case is a little close to home.

Nearly the whole press is the same, dealing in emotions and stunts, unable to face facts squarely, in a calm spirit

Macaulay’s entertaining swipe at an all too familiar newspaper industry is hung on the hook of a whodunnit told through the voices of several of those closest to the Potters and framed by sections from the more objective R. M. It’s very funny at times – Leila’s spouting of florid nonsense about Truth and Love, which personifies the sentimental school of Potterism, is particularly amusing – but Macaulay is careful to avoid caricature, painting Percy Potter as an affable figure, despite his keenness to exploit a family tragedy, exemplifying the grabby greed of the other Potterism extreme.

The Potterite press (not only Lord Pinkerton’s) advanced, like an army terrible with banners, on all sections of the line

So much of what Macaulay lampoons is depressingly familiar a hundred years after her book was published: the press’ disregard for truth over sensationalism, the prevalence of greed and entitlement all ring loud bells. Although the bald anti-Semitism, about which we’re warned in Sarah Lonsdale’s illuminating introduction, is shocking, sadly, its ugly head has been reared all too demonstrably in recent years. Potterism, itself, is a slightly amorphous idea 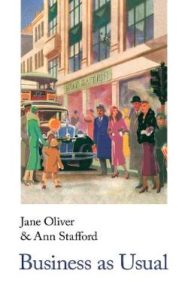 which defies definition but in the end it seems, as Gideon suggests, we’re all given to Potterism, some rather more than others. Interestingly, as Lonsdale points out, this was the novel which turned Macaulay into a bestselling author after ten years of writing. It seems the yearning for a decent press was as keen in 1920 as it is for many of us now.

If you like the sound of Potterism (or Business as Usual)  please consider ordering direct from Handheld Press. I’m sure Kate will be more than happy to bike a copy to the Post Office for you

20 thoughts on “Potterism by Rose Macaulay: Plus ça change…”